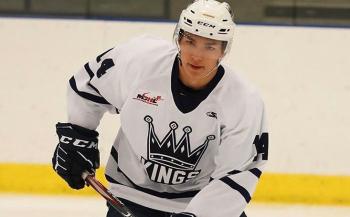 Nakodan Greyeyes has certainly taken his game to another level in his second junior hockey season.

Greyeyes, a member of the Pinaymootang First Nation in Manitoba, registered 18 points (eight goals and 10 assists) in 58 games during his rookie season with the Dauphin Kings.

As for this year, Greyeyes, an 18-year-old centre, is not only leading the Kings in scoring but he’s also atop the scoring race in the Manitoba Junior Hockey League (MJHL).

Greyeyes had racked up 45 points, including 16 goals and a league-high 29 assists, through his first 26 contests this season.

As of Tuesday, Greyeyes had a four-point lead over Kolten Kanaski, a member of the Virden Oil Capitals, who had earned 41 points through 29 outings.

Greyeyes has also had a pair of four-point nights so far this season.

Greyeyes’ performances are a drastic improvement from a year ago, when he managed to score just once in his first 22 contests.

His efforts have not gone unnoticed. Greyeyes was selected as the MJHL’s player of the month for October. He collected 18 points (five goals and 13 assists) in 11 games during the month.

The MJHL is one of 10 Junior A circuits across the country that comprise the Canadian Junior Hockey League.

Squads only play within their league during the regular season. League champs then compete in regional tournaments hoping to qualify for a national championship.

Before making the jump to the MJHL, Greyeyes spent two seasons playing for the RINK Hockey Academy program. RINK squads, based in Oak Bluff, Man., compete in the Canadian Sport School Hockey League.

Greyeyes will be looking to add to his MJHL-leading point total on Tuesday night as the Kings are hosting the Selkirk Flyers.

Dauphin will also play its next three games at home against the Winnipeg Blues (Dec. 6), Virden Oil Capitals (Dec. 8) and the Waywayseecappo Wolverines (Dec. 10).