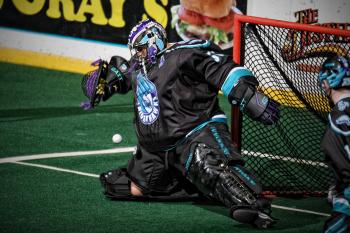 Angus Goodleaf has been signed by the Philadelphia Wings of the National Lacrosse League. Photo courtesy of the Rochester Knighthawks.

“I’m just excited about the opportunity,” he said. “They’re giving me a chance to continue my career. And I’m grateful for that.” — Angus Goodleaf
By Sam Laskaris
Local Journalism Initiative Reporter
Windspeaker.com

Angus Goodleaf insists he is healthy and ready to once again prove himself.

But because of the COVID-19 pandemic, the 33-year-old Mohawk lacrosse goaltender just doesn’t know when he will be allowed to play.

Goodleaf is thrilled though he signed a contract with the Philadelphia Wings of the National Lacrosse League (NLL) this past week.

It remains to be seen whether the NLL, a pro circuit with 13 franchises in Canada and the United States, will indeed be given the green light by medical and political authorities to commence training camps this November.

If the NLL does start its regular season on time, games will begin in late November or early December.

The fact Goodleaf, an affable netminder who is from the Kahnawake Mohawk Territory near Montreal, is healthy and keen to return to playing is welcome news throughout the lacrosse community.

That’s because last August there was plenty of concern for Goodleaf when he collapsed while playing a game for the Kahnawake Mohawks, a Senior B men’s squad, which was hosting the President’s Cup, the national Senior B championships.

After collapsing, Goodleaf did not have a pulse when the Mohawks’ trainer rushed to assist him. He was resuscitated with a defibrillator.

“We didn’t really find a diagnosis,” he said. “It was a random thing. They couldn’t find anything (wrong).”

Besides playing for various squads during the spring and summer months, Goodleaf has also played professionally in the NLL since 2010.

This past season he was property of the New York Riptide but he didn’t see any action, primarily because he had not been medically cleared to play.

Though he is from Kahnawake, Goodleaf now lives in the Six Nations community of Ohsweken. His cardiologist, based in Hamilton, cleared him to return to action this past February.

Goodleaf was hoping to return to the Mohawks and suit up once again for the Kahnawake squad this spring and summer, primarily so he could impress some NLL personnel since he was seeking another pro contract.

“I wanted to play,” he said. “I didn’t know if any (NLL) teams even knew I was healthy to play again.”

Goodleaf is pleased the Wings inked him to a new pro deal.

“I’m just excited about the opportunity,” he said. “They’re giving me a chance to continue my career. And I’m grateful for that.”

Goodleaf said he’s keen to resume playing. And despite his terrifying incident last summer, he said he didn’t think about calling it quits and retiring from the sport.

“I’m not going to live the rest of my life in a bubble,” he said. “I may as well keep playing lacrosse.”

Goodleaf will be reunited with some familiar faces in Philadelphia, including Wings’ head coach/general manager Paul Day.

Day was previously the coach/GM of the Rochester Knighthawks. Goodleaf played for Rochester for seven seasons, from 2013 to 2019. He helped the Knighthawks win back-to-back NLL championships in 2013 and ’14.

Day said he only recently found out from Wings’ assistant general manager Landon Miller, an Ohsweken resident, that Goodleaf had been cleared to return to action.

After the Philadelphia’s team doctor consulted with Goodleaf’s cardiologist and felt he was fit to return to play, the Wings made the decision to sign him, Day said.

“We were looking for a backup goalie,” Day said. “Gusy is the ultimate teammate, a good goalie and the kind of guy you want around your team. It was a no-brainer for us.”

Goodleaf is expected to be the backup for Zach Higgins, the Philly goalie who posted an impressive 8-4 record and 9.32 goals-against average in 14 appearances this past season.

Higgins was one of the three finalists for the NLL’s goalie of the year award for his efforts during the 2020 season.

But Day said he’ll also be comfortable when Goodleaf is between the pipes for the squad.

“Gusy is such a good competitor,” he said. “He comes in and steals games all the time.”

Day added Goodleaf is a valuable asset to any squad he plays for.

“He has such a positive effect on the team,” he said. “He’s always upbeat. And when he gets into the net, players want to play for him. He’s a perfect fit for our team.”

Goodleaf said he has not been told how much playing time he could potentially see with the Philadelphia squad.

“We’ll see what happens,” he said. “They’re excited for me to join the team.”

Day is not the only individual that Goodleaf will know in Philadelphia from his days with the Knighthawks.

“There’s a handful of guys I used to play with in Rochester,” he said.

Local Journalism Initiative Reporters are supported by a financial contribution made by the government of Canada.