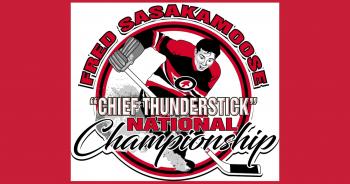 Canadian Olympian Brigette Lacquette asked organizers to include a women’s division this year. She’ll suit up for the Cote Lady Selects. “It’s a start of a new era. It’s wonderful to be able to see that.” —Fred Sasakamoose
By Sam Laskaris
Windspeaker.com Contributor
SASKATOON

A national Indigenous hockey tournament honouring a pioneer in the sport continues to grow.

For the 2020 event, which runs April 24 to April 26, there will be competing clubs from seven provinces—British Columbia, Alberta, Saskatchewan, Manitoba, Ontario, Quebec and New Brunswick.

There will also be two participating teams from Nunavut.

A year ago 32 men’s teams took part. This year that number has grown to 40 clubs, a number organizers capped.

Also, for the first time in tournament history, eight teams will be participating in a women’s category.

Sasakamoose, who is Cree, grew up on the Ahtahkakoop First Nation in Saskatchewan.

He ended up playing 11 games in the NHL with the Chicago Blackhawks during the 1953-54 season.

For many years it was believed Sasakamoose was the first Indigenous player to suit up for a squad in the NHL. But research in recent years indicates others with Indigenous ancestry might have toiled in the league before him.

Though proving the ancestry of others has been challenging, Sasakamoose can now correctly be referred to as the first First Nations player with treaty status to dress for a squad in the NHL.

Sasakamoose was given the name Chief Thunderstick by representatives of the Kamloops Indian Band during the late 1950s when he played senior men’s hockey in British Columbia.

Sasakamoose had long wished to see a national Indigenous tournament for adults.

“I’ve wanted to see a continuation of young people have a better life,” he said. “Something like this helps.”

Having the tournament named in his honour is also obviously a huge thrill.

“It is pleasing for me to be able to hear that,” Sasakamoose said. “At my age, at 86, you enjoy hearing that.”

When he was growing up, Sasakamoose was in a very small minority of Indigenous players trying to make a name for themselves at a high level of hockey.

But he’s thrilled with the large number of Indigenous players now who are in the NHL, other professional leagues or playing in high calibre junior circuits.

Sasakamoose’s son Neil is once again of the organizers of the national event.

“There’s a huge demand for this,” Neil Sasakamoose said. “I don’t know why this recipe works.”

No doubt one of the appeals is the opportunity to capture some national bragging rights.

And it’s a bonus squads do not pay a registration fee for this event. Neil Sasakamoose said it is an “invitational tournament” since organizers send out inquiries to various Indigenous communities asking if they would like to ice a team.

Corporate sponsorships cover the expenses of running the tournament.

Entrants also enjoy the event as they have a chance to take home some of the $45,000 in prize money that is up for grabs.

A number of former pros, including those that played in the NHL, have competed in the tournament in the past.

And Neil Sasakamoose is once again expecting several well-known Indigenous players to show up for this year’s event.

“With 40 teams we’ll have close to 800 (male) players in the tournament,” he said. “I would think there’s about 200 of them that have played either pro hockey or junior hockey or at the university or college level. It’s an elite tournament now.”

A tournament Facebook page also has more than 10,000 followers now.

“They religiously follow the page,” Neil Sasakamoose said. “There seems to be a real attraction to promote their communities and players that haven’t made it to the NHL yet.”

He added information on numerous Indigenous hockey players competing in junior or university/collegiate ranks is available on the page.

“We promote those people really well,” he said. “It’s like a grassroots community-based program. There’s a real need for people to talk about their community and their players.”

Neil Sasakamoose added it was Canadian Olympian Brigette Lacquette, who asked organizers to include a women’s division this year.

Lacquette, who became the first First Nations player to suit up for the Canadian Olympic women’s hockey team in 2018, participated in the national tournament last year with a men’s team.

She’ll suit up for the Cote Lady Selects this year.

Fred Sasakamoose is happy a women’s category has been added to the tournament this year.