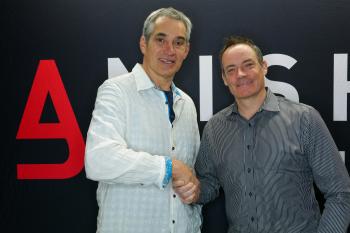 “Moving forward the promise is that five per cent of everything we do from here on will be donated to the charity.” — Shawn Rivers
By Sam Laskaris
Local Journalism Initiative Reporter
Windspeaker.com

John Chabot and Shawn Rivers, who both played in the National Hockey League, were never teammates during their hockey careers.

But the pair have teamed up in their post-hockey lives to run a successful business, Anish Branding.

The company specializes in corporate clothing and promotional products as well as display and trade show signage.

The relationship between the two ex-pros has now gone one step further. Rivers, the president of Anish Branding, has decided to start donating a portion of the company’s sales to Chabot’s charity First Assist.

Launched in 2012, First Assist delivers education and sport integration programming for youth in northern Indigenous communities across the country.

Anish Branding, which is based in Ottawa, recently made a $5,000 donation to First Assist.

“It was a nice kickoff to our fundraising,” said Chabot, a member of Kitigan Zibi Anishinabeg First Nation in Quebec.

Chabot and Rivers are hoping that others will also jump on board and start donating to First Assist.

“I would love for that to happen,” said Chabot, who appeared in 541 NHL contests and played for the Montreal Canadiens, Pittsburgh Penguins and Detroit Red Wings. “I think it would be a great way to support us.”

Chabot, who is 58, is taking steps to try and make that happen.

“I’ve hired two Indigenous women to write proposals to private corporations and maybe we’ll go into the private sector as well,” he said.

“Moving forward the promise is that five per cent of everything we do from here on will be donated to the charity,” he said.

Ideally, Rivers said donations would occur a few times annually. But there’s a chance they might also be done just once per year.

Though he did play six seasons of pro hockey, Rivers, who is now 50, only suited up for four NHL contests, all with the Tampa Bay Lightning during the 1992-93 season.

His younger brother Jamie is also a former pro, who dressed for 469 NHL matches.

Rivers said the brothers over the years have mistakenly been identified as Indigenous.

“I have no idea how that started,” Rivers said.

It has been reported the brothers have Huron ancestry.

“We always thought there was Indigenous blood on my dad’s side,” Rivers said. “But there wasn’t.”

Perhaps some people came to the conclusion that Rivers and his brother were Indigenous because they both have large dreamcatcher tattoos on their arms.

But Rivers explained the symbolism of those tattoos.

“That goes back to my dad’s father,” he said. “He was always a big believer in pursuing your dreams.”

Like Chabot, Rivers is hoping Anish Branding’s recent donation will persuade other businesses to provide some financial assistance to the First Assist charity.

Over the years First Assist has worked with more than 3,000 Indigenous youth. Its mission is to help these young people be successful in school by utilizing sport as a motivational tool.

During his work with the charity Chabot has travelled to Indigenous communities in Ontario, Northwest Territories, Yukon, Nunavut and Nunavik.

Goals of the program include promoting better attendance in school, boosting classroom engagement and promoting healthier habits, which can carry on throughout one’s life.

First Assist’s work is done with a collaborative approach. Community members are always consulted and are asked to provide continuing support and encouragement for the youth to achieve their goals after charity representatives leave the community.

“We work with everybody in the community as they see best,” Chabot said.

Though they both played in the NHL, Rivers and Chabot didn’t cross paths on the ice until later in their careers when they were both toiling in Germany’s top professional league.

Chabot spent nine seasons playing in Germany while Rivers only toiled in the country during the 1996-97 campaign.

More information on First Assist is available at www.firstassist.ca