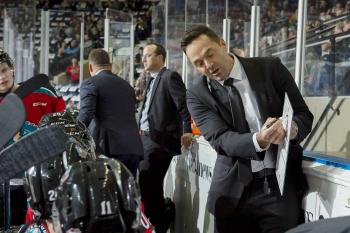 Vern Fiddler behind the bench. Photo by Marissa Baecker/Kelowna Rockets 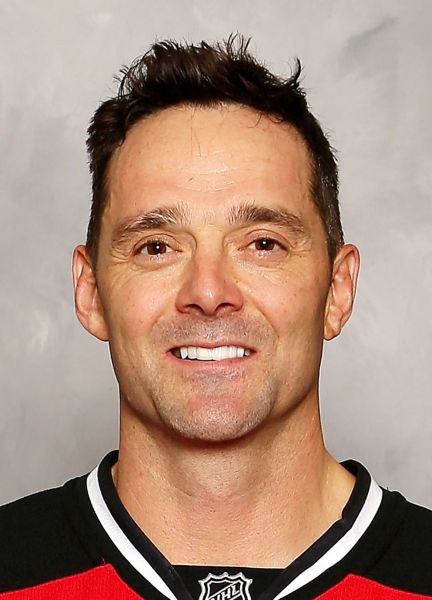 Vern Fiddler has returned to his roots.

And now the 39-year-old Metis man is passing on his knowledge in the hope those he’s coaching will follow in his footsteps and go on to professional hockey careers.

He’s now in his first season serving as an assistant coach with the British Columbia-based Kelowna Rockets, members of the Western Hockey League (WHL).

Fiddler spent his first three years in the junior ranks playing for the Rockets. Then early on in his fourth and final WHL season he was traded to the Medicine Hat Tigers.

The Rockets are one of 22 clubs in the WHL, which includes franchises in Canada’s four western provinces as well as squads in the states, Washington and Oregon.

“It means a lot to me,” Fiddler said of the fact he’s now coaching with his former junior team. “I always had a lot of pride playing in Kelowna.”

Fiddler also had praise for Rockets’ president and general manager Bruce Hamilton. As a teen Hamilton gave Fiddler, who was undrafted by any junior squads, a chance to play for the Kelowna team. And Hamilton is now giving Fiddler a chance again, this time to prove himself behind the bench.

“To come back it almost feels like it’s déjà vu again,” said Fiddler, who is working with the Rockets’ forwards and also has responsibilities overseeing the club’s power play.

Fiddler is actually in his second season of coaching. He spent the 2018-19 campaign working as an organizational coach with the NHL’s Dallas Stars. His duties included serving as a skills and development coach, not only with the Dallas players but with those on its American Hockey League (AHL) affiliate Texas Stars.

Instead of being on the Dallas bench though, Fiddler was an eye-in-the-sky coach, watching games usually from the press box.

Fiddler did have some talks with the Stars’ brass about returning for another season in the same post. But he felt a move to the junior ranks could better help him in his quest to one day earn a job as a coach on an NHL bench.

“I was looking to get more experience on the bench and they agreed with that,” Fiddler said of Stars’ officials.

Fiddler is not the only former NHLer on the Rockets’ bench. Adam Foote, who was a member of the Stanley Cup champion Colorado Avalanche in 1996 and in 2001, is Kelowna’s head coach.

Regardless of how they fare this season the Rockets will have an opportunity to play for a prestigious championship next May.

That’s because the Kelowna franchise will host the 2020 Memorial Cup tournament. As hosts, the Rockets have an automatic entry into the four-team event, which will crown the champs of the Canadian Hockey League (CHL).

Joining the Rockets at the Memorial Cup tourney will be the WHL champs (or finalists if Kelowna ends up winning the league) as well as the OHL and QMJHL playoff winners.

Though the Rockets are guaranteed to still be playing next May, Fiddler said the club’s coaching staff is not taking anything for granted.

Kelowna is off to a decent start in its 2019-20 campaign. The Rockets have posted a 4-2-0-1 record in their first seven starts.

“We’re not completely satisfied,” Fiddler said. “We know it’s early in the year. And we’re still trying to figure out where guys fit into the lineup.”

Kelowna’s next game is Friday, on the road against the Seattle Thunderbirds. The Rockets will then return home and host the Kamloops Blazers on Saturday.

Primarily utilized as a defensive forward, Fiddler had a career best 32 points (11 goals and 21 assists) during the 2007-08 season with the Predators.

Early on in his pro career Fiddler also had stints in the minor leagues. He toiled in the ECHL with the Arkansas RiverBlades and Roanoke Express and in the AHL with the Norfolk Admirals and the Milwaukee Admirals.