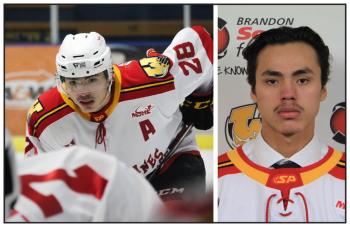 “We still have the offence. We can still score. But this year we are a lot better defensively, that’s for sure.” — Carson Baptiste
By Sam Laskaris
Local Journalism Initiative Reporter
Windspeaker.com

Carson Baptiste’s junior hockey eligibility is coming to an end.

But the 20-year-old, who is Cree and a member of Montana First Nation in Alberta, is working to prove himself this year in the hopes he’ll be able to further his career at the post-secondary level next season.

Baptiste, a right winger toiling with the Waywayseecappo Wolverines of the Manitoba Junior Hockey League (MJHL), is certainly doing his best to make others take notice.

He has already surpassed statistical totals he had last season in terms of goals, assists and points. He’s collected 44 points, 10 more than all of last year, in his first 30 regular season outings.

And with 24 goals so far, he’s scored a half-dozen more times than he did in 52 regular season matches during the 2021-22 campaign.

Baptiste’s play during the month of December was impressive. He averaged more than two points per game. He racked up 13 points, including nine goals, in six matches.

For his efforts he was named the MJHL player of the month. And he was also chosen as the third star for December for the entire Canadian Junior Hockey League, an umbrella circuit that is comprised of the nine Junior A leagues across the country.

“I believed in myself and thought I could have a pretty good year,” Baptiste said. “And so far, I’m doing it.”

Baptiste, who is leading the Waywayseecappo squad in scoring, said one of the main reasons for his success has been the solid play of his linemates. He’s spent the majority of the season toiling with centre Andrew Boucher and left winger Boone Mathison.

Boucher, however, has missed the team’s past few games with an injury and has been replaced on the Wolverines’ top line by Cody Blight.

The line has continued to produce though and Baptiste has earned six points in five games with his new linemate.

The Wolverines are also getting production and solid play from several others. This explains why the club has registered a 21-9-3-2 record.

The Waywayseecappo side is sitting atop the league’s six-team West Division. The MJHL also includes a seven-club East Division.

“Coming into the year I wasn’t sure how the team would be,” Baptiste said. “I didn’t think we’d be this good.”

Baptiste praised Taylor Harnett, who is in his sixth season as the Wolverines’ head coach and general manager, for building a solid club.

“Before the season he brought in a bunch of guys from all over,” Baptiste said.
The Wolverines’ current roster includes five players from the United States. And Baptiste is one of eight players from Alberta in Waywayseecappo’s lineup.

The Wolverines, who play their home contests in Waywayseecappo First Nation, are the only franchise in the CJHL that is owned by a First Nation.

Baptiste, however, is just one of two Indigenous players with the club this season. Defenceman Lucas Eagle, a member of Thunderchild First Nation in Saskatchewan, is the other.

Besides the regular season success they are currently enjoying, Baptiste is hoping the Wolverines can also have a lengthy post-season.

A year ago the Waywayseecappo side was swept 4-0 in its opening best-of-seven playoff series against the Virden Oil Capitals.

Baptiste said the club is considerably better this season.

“We still have the offence. We can still score,” he said. “But this year we are a lot better defensively, that’s for sure.”

As for his future, Baptiste is hoping he’ll be able to play at the university level, either in Canada or the United States, next season.

He is eager to return to the classroom. He has not been a student/athlete since 2019 when he graduated from high school.

Baptiste left his First Nation home in Alberta the following year to commence his junior hockey career with the Wolverines.

He appeared in just two of Waywayseecappo’s 10 games that season before league play was shut down because of the COVID-19 pandemic.

Baptiste is hoping to enrol in a social work program at university. He said no school team on either side of the border has expressed an interest in his services so far.

He’s hoping continued solid play this season will eventually lead to some sort of offer.

“I wouldn’t mind going to the U.S.,” he said. “And if I’m going to stay in Canada I want it to be a decent (school). I just want to go where I will be treated well.”