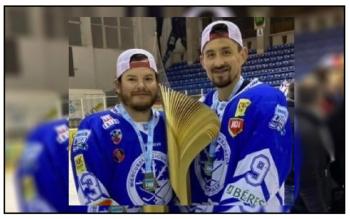 Colton Yellow Horn, left, and Judd Blackwater were members of a Romanian-based pro hockey team that captured the Erste Liga championship this season.

“It was awesome just to have someone so close to you playing all year with you.” — Judd Blackwater
By Sam Laskaris
Windspeaker.com Contributor

More than a quarter century after they first became teammates, Judd Blackwater and Colton Yellow Horn have won a major hockey championship together.

The First Nations players, who are both 33, were members of the Sport Club Csikszereda, a Romanian-based squad that recently captured the Erste Liga championship. The 10-team professional league features seven clubs from Hungary and three from Romania.

The Csikszereda side also competes in the seven-team Romanian Hockey League. The club will begin its quest to win that league championship on Wednesday.

Yellow Horn, however, will not be part of that post-season run as he has already returned to Canada to commence treatment on an undisclosed injury.

The pair have been friends since the age of seven when they played house league hockey together in Fort Macleod, Alta.

Blackwater and Yellow Horn though did not play for the same pro squad until midway through the 2019/20 campaign, when they found themselves toiling for a club in Slovakia.

As for this season, Blackwater was thrilled he was able to spend a full season and win a pro championship with a friend he has had since childhood.

“It was awesome just to have someone so close to you playing all year with you,” he said.

The pair were key members of the Csikszereda squad in Erste Liga action. They were on the club’s first line. Blackwater centred that top unit while Yellow Horn alternated between playing on the right and left wings.

Blackwater added 24 points in 15 Romanian league outings, while Yellow Horn suited up for 11 games in that circuit and had 17 points.

Yellow Horn is now back home in Brocket, the main community of Piikani Nation.

He played in Csikszereda’s opening playoff series before being sidelined with his injury. He stayed in Romania until it captured the Erste Liga title before returning home.

Since he would have been unavailable to play in the Romanian league playoffs, Yellow Horn said team officials agreed it would be best for him to return home early.

“It was a mutual decision to try to get this treatment going as soon as possible,” he said.

While Yellow Horn is back in Canada, Blackwater still has some familiar faces with him in Romania. That would be his partner Courtney and their daughter Burke, who is seven months old.

“They came in December and I was here in September so they missed a few months,” Blackwater said. “They were only going to stay a few months but they ended up staying the whole time because it worked out well and with everything going on back home I felt more comfortable with them being here.”

It remains to be seen whether Blackwater and Yellow Horn will return to the Csikszerada squad next season.

“It’s been great here but it’s been a little tough, because we’ve been in a hotel for the year,” Blackwater said. “If I was to play here next year, it would be good to get an apartment and have a little better living situation.”

Yellow Horn also had a room in the same hotel that Blackwater and his family were living in.

For now, Blackwater is trying to focus on helping the Csikszerada team win a second championship this season.

Four teams will be participating in the Romanian league playoffs.

Csikszerada is seeded third heading into the playoff schedule. But it did defeat top-seeded Corona Brasov 4-2 in the best-of-seven Erste Liga championship final.

Romanian league officials recently decided to shorten their playoffs to best-of-five affairs, instead of best-of-seven series.

Blackwater believes his squad is capable of winning the Romanian league title.

“It’s going to be a battle but hopefully we can pull it off,” he said. “We have the confidence.”