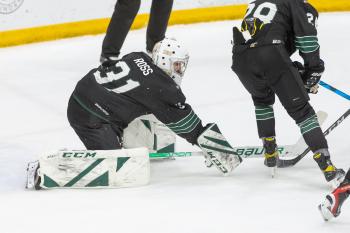 Roddy Ross will be in goal for the Canadian men’s hockey team that will compete at the World University Games.
By Sam Laskaris
Local Journalism Initiative Reporter
Windspeaker.com

Despite having a stellar junior career and becoming a National Hockey League draft pick, Roddy Ross is still trying to make others take note of his abilities.

And that’s why Ross, a member of Canoe Lake Cree First Nation in Saskatchewan, is thrilled with an opportunity that he will have next month.

Ross, a 22-year-old goaltender, has been named to the Canadian men’s hockey team that will compete at the World University Games, which will be held Jan. 11 to Jan. 22 in Lake Placid, N.Y.

For Ross, who is in his second season with the University of Saskatchewan Huskies, the Games will mark the first time he has represented Canada in an international tournament.

The men’s hockey competition at the Games will feature 12 clubs. The event is also expected to attract numerous scouts from various pro franchises.

Ross had been drafted by the Philadelphia Flyers in the 2019 NHL Entry Draft. Despite attending two training camps with the Flyers, he was never offered a pro contract from the organization.

After using up his junior eligibility, Ross opted to continuing honing his skills in the Canadian university ranks. And he’s hoping his play at the Lake Placid tournament will catch the attention of some pro talent seekers.

“I think it will help a bunch,” he said. “It’s always huge to go to a tournament like this. If I keep doing my thing, there will always be a chance to get some exposure.”

Ross will fly to Ottawa on Jan. 8 to meet the rest of his Canadian teammates. The only individual he currently knows that he’ll be playing with in Lake Placid is Jared Dmytriw, who also toils for the Huskies.

After converging as a team in the nation’s capital, the Canadian squad will make its way to the world tournament.

Following round-robin action the top two finishers from each pool will advance to semi-final action.

The Canadian men’s squad traditionally fares well at the World University Games. It has finished on the podium 16 of the 17 times the winter version of the Games has been held.

Canada won the bronze medal at the last Games, held in 2019 in Russia.

Ross is anticipating the Canadians will also have success in Lake Placid.

No one will have to worry about squaring off against the defending champions from Russia.

“I know the Russians are usually pretty strong but they’re not coming this year,” Ross said.

That’s because this past February the International Ice Hockey Federation’s Council suspended Russia from all international events until further notice because of its military aggressions in Ukraine.

Ross had started making a name for himself during the 2018-19 season. He started that campaign with the Camrose Kodiaks, members of the Alberta Junior Hockey League.

Midway through the season, however, he was signed by the Seattle Thunderbirds in the higher calibre Western Hockey League (WHL).

Ross had plenty of early success with the Thunderbirds, posting a 16-5-3 record and a 2.76 goals-against average in 25 regular season matches.

Ross became Seattle’s Number 1 goalie the following season and he handled the bulk of the team’s netminding duties, appearing in 49 games.

Ross returned to his home province for his final junior season as the Thunderbirds traded his playing rights to the Regina Pats. But because of the COVID-19 pandemic, the WHL had a shortened schedule during the 2020-21 campaign and Ross only played 16 games.

After that season, Ross headed to the University of Saskatchewan.

“It was something that I was interested in,” he said. “And I had family that had played at the school.”

Ross’ cousin Craig McCallum had suited up for the Huskies from 2010-15.

“I just asked him some questions,” Ross said. “Not anything specific I was looking for. But I just wanted to ask him about his time there.”

Ross is a second-year arts and sciences student at the university. He has yet to declare a major.

And since he still continues to have an aspiration to play pro hockey, he’s not certain how much longer he’ll be at the university. If a decent pro offer came along, he’d in all likelihood take it.

“I don’t know,” Ross said if he plans to continue with his schooling and playing for the Huskies. “But it would be great to get (a degree) out of it.”