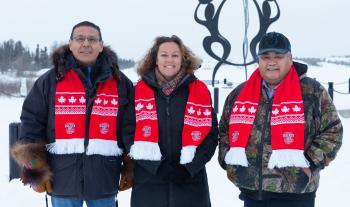 The Yellowknives Dene First Nation will be among those showcasing the country’s Great White North this coming February.

The First Nation has partnered with the city of Yellowknife and will host the 2020 edition of Scotiabank Hockey Day in Canada on Feb. 8.

The annual event will culminate with a national broadcast, lasting 12-and-a half-hours, on Sportsnet.

The event, however, will be a four-day affair, beginning on Feb. 5. Various hockey games and hockey-themed activities will be staged throughout the four days.

Yellowknife is located on Chief Drygeese Territory, which is the home of the Yellowknives Dene First Nation.

The backdrop for the outdoor broadcast will be Somba K’e Park, a gathering place in Yellowknife situated on the shores of Frame Lake. The park is located in front of city hall.

Community skating on an outdoor rink will be held throughout the broadcast.

Among those who will be in Yellowknife during the festivities are a pair of former National Hockey League players, seven-time Stanley Cup champion Bryan Trottier and Darcy Tucker. Both Trottier and Tucker have Metis ancestry.

Also taking part in events will be two other ex-pros, Wendel Clark and Lanny McDonald.

The 2020 event will mark the 20th edition of the Scotiabank Hockey Day in Canada.

The inaugural Scotiabank Hockey Day in Canada was held in 2000 in Toronto. But next year will signify the 20th time it has been held since there was no event in 2005 due to the NHL lockout, a dispute which saw the cancellation of the entire 2004-05 season.

Two previous editions of the event have been held in one of the country’s territories. The 2003 event was held in the Nunavut capital of Iqaluit and the 2011 event was staged in Whitehorse, Yukon’s capital.

Organizers of the 2020 event are currently seeking volunteers to ensure their event runs smoothly.

Several volunteer categories are available. Responsibilities include helping out with hockey clinics, transpotation and a banquet that will be held in conjunction with the event.

Individuals are also being sought to join one of the organizing committees. These include groups that will focus on the banquet, arts and culture, traditional games and outdoor hockey events.