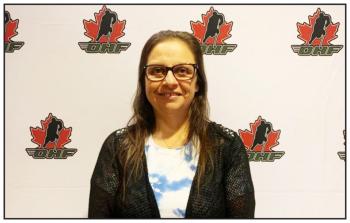 “I think I have a good foundation of grassroots hockey and a good knowledge of how things are run.” — Gayle Payette
By Sam Laskaris
Local Journalism Initiative Reporter
Windspeaker.com

Gayle Payette has made a bit of history.

A member of M’Chigeeng First Nation on Manitoulin Island in Ontario, Payette officially joined the Ontario Hockey Federation (OHF) board of directors on June 24.

She was one of four new directors added to the board during the OHF’s annual general meeting, which was held at the Toronto Airport Marriott Hotel.

Payette is believed to be the first Indigenous person to sit on the OHF board.

As an Indigenous woman, Payette believes she will be able to bring some cultural diversity as well as some knowledge to the OHF board.

“There is a voice now that will be supportive at that level,” she said.

Payette has been serving as the second vice-president of the Northern Ontario Hockey Association (NOHA) since 2020.

She had one year remaining on that three-year position. Now because of her OHF appointment, she will have to resign from her NOHA post.

Payette had originally been nominated to join the OHF board in 2021. About six weeks ago a member of the OHF’s nominating committee reached out to her to determine if she still wanted her name to stand for a director position.

“It was just a formality of going to the AGM to accept the position,” Payette said.

Payette, who is a Grade 2 teacher at Wiikwemkoong Junior School, believes she will bring various attributes to the OHF board.

“I think I have a good foundation of grassroots hockey and a good knowledge of how things are run,” she said.

Payette’s involvement with the sport can be traced back to 1994 when she became the secretary of the Manitoulin Minor Hockey Association.

“They were having some troubles getting people involved,” Payette said, adding she accepted the position in part because her husband Mike was working as a referee at the time.

During her early years in the sport, Payette was disappointed to see the antics of some parents and fans, yelling at refs, unsupportive of calls, or just being mean.

“I adamantly said if we were to ever have a child, that child would never be involved in hockey,” she said.

Well, that didn’t turn out to be the case. The Payettes’ son Mitchal, who is now 24, took up the sport and ended up progressing up to the Junior A ranks with the Northern Ontario Junior Hockey League’s Espanola Express.

Though she is hoping to make numerous contributions, there is one thing in particular that Payette is keen to work on now that she is an OHF board member.

“I have a passion for recruitment and retention,” she said.

Payette said there has been a decrease in the number of officials in the sport throughout Ontario in recent years.

“I’d like to find out more of the why,” she said. “And then I want to figure out how to get interest there.”

Payette is also interested in finding out ways to recruit and keep more players and volunteers in the sport. She said numbers for both have been going down in recent years and not just because of the pandemic.

Payette will be expected to attend four in-person board meetings per year in Toronto. Plus, she will participate in about a half dozen Zoom meetings annually as well.

Her responsibilities will also include taking part in various OHF-sanctioned hockey development programs and assisting with provincial championships.

“It’s going to be a learning process for me as well,” she said.

Payette believes her first in-person board meeting will be held in September.

Board members are also expected to sit on some OHF committees and perhaps perform some special tasks.

Payette said board members are currently waiting to see which committees they will be placed on.

In the meantime, she does have some work to keep her busy.

“I have a lot of reading to do,” she said. “Some of my reading will be on the logistics of being a board member and what is expected.”

Payette said she continues to aspire to move up the hockey ladder in the country. She would love to one day be a Hockey Canada board member.

“That would be ideal,” she said. “But we’ll see how things work out with the OHF first.”