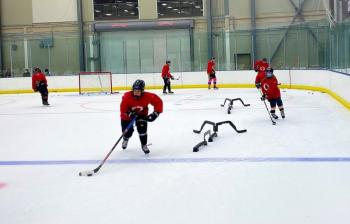 Players train under the Om Hockey Systems program with obstacles on the ice, simulating game conditions.

A hockey program that has been running at Enoch Cree Nation in Alberta this summer is wrapping up this weekend.

But there’s a good chance that Indigenous communities in western Canada will be hearing a lot more about Om Hockey Systems in the future.

That’s because Tyadg McGauley, who founded and is the president of the hockey development program, is now gearing up for a pilot project with the Big River First Nation in Saskatchewan.

As many as 200 Big River students are expected to take part in the Om Hockey Systems program, which will be offered through their school board starting this November. Students will have two training sessions each week.

McGauley, 31, is a former professional hockey player who launched his unique training program in 2018.

“The way we train high-level hockey players is archaic and inefficient,” McGauley said.

He believes other training programs are not beneficial as they do not simulate real game situations.

To this end, when training its players, Om Hockey Systems provides various obstacles which are placed on the ice. Players need to stickhandle pucks with accuracy when they approach these obstacles in order to place pucks through different holes. At times they also jump over obstacles.

“We closely mimic the environments a hockey player will have in a game,” McGauley said. “We train skating, shooting and stickhandling all in one movement around an obstacle.”

McGauley, who is not Indigenous himself, is keen to expand Om Hockey Systems to First Nation communities.

“We want to make these schools into sports academies,” he said.

Om Hockey Systems operated a pair of programs for Indigenous youth this summer.

One was held at Enoch Cree Nation, where those in under-9 through under-18 categories were offered free training sessions. These workouts began in June and will end this Sunday.

About 100 individuals took advantage of the free workouts.

“The kids have really improved,” McGauley said. “We’ve been following them and they have improved quite a bit.”

Players in the various age groupings were all offered 20 hours of training each.

True North Aid covered the costs of running the program, so it was entirely free for all participants. True North Aid is a Canadian charity dedicated to serving and supporting Indigenous communities throughout the country.

The program was for youth from Enoch Cree Nation but was then opened up to players from other nearby First Nations.

McGauley said about 70 players registered for the program. And then about 30 non-Indigenous players were also allowed to participate.

McGauley felt having both Indigenous and non-Indigenous players training together would provide some unity and some togetherness as Canada navigates reconciliation of past and ongoing harms to Indigenous peoples.

“Obviously, this country is going through some tough times with what happened at residential schools and the uncovering of the things that had happened,” he said.

“In my opinion Indigenous kids are a huge untapped resource for hockey,” McGauley said.

He’s also hoping to offer the training program in First Nations communities so players don’t have to travel large distances to further their development.

“We want them to develop at home,” McGauley said.

McGauley said his unique training program can also be adapted to the field to train soccer players.

In fact, that’s what will happen at Big River First Nation starting next month.

The pilot project in the community will actually begin in September where students will take part in a soccer development program three times per week.

The plan is to then have the hockey program commence in November and have it operate twice a week.

During the 2008-09 season he appeared in some contests with the Lloydminster Bobcats of the Alberta Junior Hockey League.

The following year he was a member of the Beaver Valley Nitehawks, a Junior B squad that competes in the Kootenay International Junior Hockey League, which primarily features clubs based in British Columbia.

And then during the 2010-11 season he ventured south of the border and joined the Philadelphia Jr. Flyers of the Atlantic Junior Hockey League.

McGauley then spent four years of playing pro hockey. He started off with a Swedish team called Njurunda before playing three seasons with the Nikko Icebucks, who participate in Asia League Ice Hockey.