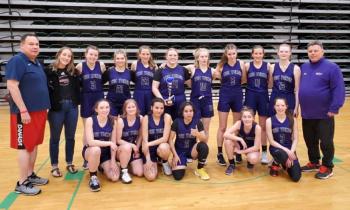 Jason Peters (left), a member of Glooscap First Nation in Nova Scotia, will make history at the Canada Summer Games as head coach of the Yukon girls basketball squad.

“Coaches have looked at our offence and have tried to dissect it. And they struggle with it because it’s all about options. It’s not about set plays.” —coach Jason Peters
By Sam Laskaris
Local Journalism Initiative Reporter
Windspeaker.com

Peters, a member of Glooscap First Nation in Nova Scotia, is expected to become the first Indigenous person to serve as the head coach of a basketball club at the Canada Summer Games.

He’s the bench boss for the Yukon girls’ squad that will compete at the Games, which are scheduled for Aug. 6 to Aug. 21. The Games will be held in Niagara, a regional municipality in Ontario.

Peters is currently living in the Yukon town of Watson Lake. He’s also working as the executive director for Liard First Nation.

The Games were first held as part of Canada’s centennial celebrations. They are staged every two years, alternating between summer and winter games.

“It was just confirmed (Wednesday) that I am the first Indigenous person to be a head coach of a Canada Games basketball team,” Peters said. “I had some friends go back to 1967 to check and I’m it.”

And what does it mean for Peters to be making history?

“I’ve always worked in both worlds, the Indigenous one and the non-Indigenous one,” he said. “So, I guess for me it’s just nice and maybe in the future I can look back at it. But I have a job to do and my job is to prepare Team Yukon for the 2022 Canada Games.”

Perhaps at a later date he’ll take a moment to enjoy his individual accomplishment, he said, “but right now I just love what I’m doing. I love coaching this team and I’m looking forward to see how we do at the Games.”

For Peters, who is 49, this won’t be his first time involved with the Games. He had served as an assistant coach with the New Brunswick girls’ squad that took part in the 2009 Canada Summer Games staged in Charlottetown, P.E.I.

Peters was also the head coach of the Nova Scotia men’s under-19 club that had been preparing to compete at the 2021 North American Indigenous Games. But that event has been postponed a couple of times due to the pandemic and is now scheduled to be held during the summer of 2023.

Peters said preparing a territorial team has been considerably different than when he was part of previous provincial clubs.

“Three months ago when we had our tryout, we only had a handful of people come out,” Peters said of his initial workout with the Yukon squad. “I think we had 19 players come out. Coming from New Brunswick and Nova Scotia, normally they’re in the hundreds, so we’re relatively limited.”

The maximum 12 players were eventually selected for the Yukon side. Only one of those individuals is Indigenous. Forward Sammy Demchuk, who lives in Whitehorse, is Métis.

The girls’ basketball tourney will feature a dozen entrants. All 10 provinces will be represented and besides Yukon, the Northwest Territories will also send a club.

Peters’ squad is guaranteed to play at least four games, including its opener versus New Brunswick.

Peters was asked whether his club is capable of pulling off some upsets.

“With this group, I’m sure not going to say no,” he said.

“I think what’s so special is that we don’t have two or three players who are going to come out and put up 30 or 40 points. We have a team that’s going to put up that. You never know where our scoring is coming from.”

And that can be troublesome for opponents.

“Coaches have looked at our offence and have tried to dissect it,” Peters said. “And they struggle with it because it’s all about options. It’s not about set plays.”

Peters said a team strength is its play when it doesn’t have the ball.

“Our defence is the heart of our team,” he said. “Our girls are ferocious on defence.”

That’s primarily out of necessity.

“We don’t have the size of many of the provinces are going to attend the Games with,” Peters said, adding the tallest player on his team is probably an even 6-foot. “I would expect lot of them may have (players) up to 6-foot-5. I would assume some of the bigger jurisdictions like Quebec, Ontario, Alberta and B.C., they’re going to have (tall players).”

Peters, who was named as the president of Basketball Yukon earlier this month, said his team’s goal at the Games will simply be to be competitive.

“Our goal actually isn’t Canada Games, believe it or not,” he said. “Our goal is in January. It’s the Arctic Winter Games. I have it set in their minds that they are going to be a medal contender.”

The 2023 Arctic Winter Games will be held in the Alberta municipality of Wood Buffalo, starting Jan. 29 and continuing until Feb. 4.