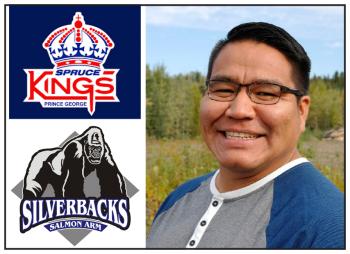 “This event is a fantastic way for us to extend the league’s reach into communities that may not typically get to see this level of hockey…” — Chris Hebb, British Columbia Hockey League commissioner
By Sam Laskaris
Local Journalism Initiative Reporter
Windspeaker.com

Lake Babine Nation will finally be getting some British Columbia Hockey League (BCHL) action in its community.

Officials from the Junior A hockey league announced this past week that it has reached a partnership with the First Nation to stage a pair of upcoming regular season contests in the village of Burns Lake.

The B.C. village is on the territorial lands of Ts’il Kaz Koh First Nation. Also, five other local First Nations, that are in or surrounding Burns Lake, are supporting the matches, which will be part of the BCHL’s 2022 Road Show.

A pair of BCHL squads, the Prince George Spruce Kings and the Salmon Arm Silverbacks, will play two regular season contests at the Tom Forsyth Memorial Arena. The first match is scheduled for Feb. 25 2022. The two clubs will square off again on Feb. 27, 2022.

Lake Babine Nation Chief Murphy Abraham said he was first approached with the idea of staging BCHL games in Burns Lake between three and four years ago when he was serving as the First Nation’s recreation co-ordinator.

“It didn’t work out though then because we had a big fire,” Abraham said.

The BCHL did end up launching its Road Show events in 2020. It partnered with the Haisla First Nation to stage two league games in Kitimat involving the Spruce Kings and the Langley Rivermen.

The COVID-19 pandemic, however, prevented any Road Show matches from being held in 2021.

BCHL commissioner Chris Hebb is pleased games have now been scheduled for Burns Lake in a few months.

“This event is a fantastic way for us to extend the league’s reach into communities that may not typically get to see this level of hockey and for us to engage with them in a personal and meaningful way,” Hebb said. “Kitimat was a great starting point for us and, through our partnership with Lake Babine Nation, we can’t wait to build on that success this season.”

Capacity at the Tom Forsyth Memorial Arena is about 500 spectators. Abraham is anticipating sellouts for both matches.

He’s hoping some tickets will be set aside for Prince George and Salmon Arm fans who will be eager to travel and see their squads compete in a facility that they traditionally do not play in.

The chief said members of his First Nation are ecstatic an elite level of hockey will be coming to the community.

“Everyone is jumping with joy right now,” he said.

Abraham said all six First Nations have agreed to work together to promote the 2022 Road Show.

“There is no written agreement,” Abraham said. “At the moment it’s more of a moral support.”

Abraham said there will be about $100,000 in expenses to bring the Road Show to Burns Lake. About $20,000 in sponsorships has already been secured.

But Abraham said a committee has been established to try and find additional funding, including a major corporate sponsor for the event.

Besides the two BCHL games that will be held, the Road Show will also include several other activities.

For example, both participating squads will have some of their players take part in school visits, as well as a hockey clinic for elementary school students.

A goal is to also have some former Vancouver Canucks’ players show up and take part in some of the activities, including meet and greet sessions.

“Showcasing our culture is also what we want to bring to these games,” Abraham said, adding he’s hoping Indigenous entertainment will be provided at the contests.

Abraham said he is a hockey fan himself.

“I do my best to keep up with the Canucks,” he said of the lone B.C.-based franchise in the National Hockey League.

Abraham tries to attend a couple of Canucks’ games each season, adding he’s impressed with the skills possessed by elite hockey players.

“That’s something we want to bring to Burns Lake at the BCHL level,” he said.

Abraham added he would entertain the idea of having other BCHL games in Burns Lake in future years as well.

“We’re hoping that’s the case, but I think the league is hoping to do this throughout the province,” he said.