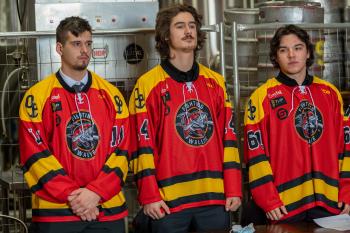 “This night will be pretty special. My entire family will be there. And I can imagine most of the members from the (Fort William) reserve will be there too.” — Trenton Morriseau
By Sam Laskaris
Local Journalism Initiative Reporter
Windspeaker.com

Saturday night will be more than just another hockey game for Trenton Morriseau.

The 19-year-old forward, a Fort William First Nation member, will be joined by his Kam River Fighting Walleye teammates as they don their Orange Wave Night jerseys.

The Kam River squad, a Junior A team that participates in the Superior International Junior Hockey League (SIJHL), will host the Dryden Ice Dogs in the game, which will be staged at Norwest Arena in Thunder Bay, Ont.

“It’s all about truth and reconciliation and bringing people together for the right reason,” Morriseau said of his team’s Orange Wave Night, which aims to educate people about the history of Indigenous peoples and colonization.

The specially designed jerseys, which will be worn for just one game, feature the four colours of the traditional medicine wheel; red, yellow, black and white.

The awareness-raising contest will also serve another purpose. A total of 24 orange jerseys designed specifically for this match will be auctioned off afterwards.

Proceeds will go to a new scholarship, the Warrior Supplies and Engineering Scholarship Fund, that will be created in partnership with one of the Fighting Walleye local sponsors.

The online auction runs until March 16. Details are available here:

Scholarship funds will be distributed to Indigenous players who suit up for the Kam River squad and then attend post-secondary schools to further their education.

As of Friday morning, Goodman’s jersey had the highest bid of $1,000 so far. The top bid for Morriseau’s jersey was $610.

Scholarship funds, however, might not be distributed during the 2022-23 season.
“This year we don’t have any (Indigenous) 20-year-olds that are graduating and that are going on to university or college,” Geddes said.

Geddes added it is possible, however, one of the team’s current Indigenous players will indeed enroll in some post-secondary courses for next season and be eligible for some funding.

A selection committee will be formed to determine the amount scholarship recipients will receive. The committee will consist of team officials as well as sponsor reps.

Morriseau graduated from high school in Thunder Bay in June 2020. He has talked to some Canadian university schools, as well as some NCAA Division 3 schools about furthering his academic and athletic pursuits.

“My goal is to try and play the highest level of hockey possible,” Morriseau said, adding he will in all likelihood return to the Fighting Walleye squad for his final season of junior eligibility.

Morriseau, a left winger, is currently second in team scoring, having racked up 41 points (17 goals and 24 assists) in 34 matches.

He’s hoping to further develop his game next season with the Kam River club and then hopefully be offered an athletic scholarship from an NCAA Division 1 school in the U.S.

Morriseau believes Saturday’s Orange Wave Night will be an emotional one for him.

“This night will be pretty special,” he said. “My entire family will be there. And I can imagine most of the members from the (Fort William) reserve will be there too.”

Morriseau, who lives on Fort William First Nation, is also pleased to see the interest his jersey is generating in the auction. The bidding started at $100 for each jersey. A total of 18 bids have been placed on Morriseau’s jersey so far.

Saturday’s contest will also include both pre-game and post-game festivities.

A light show and some traditional Indigenous drumming will be featured prior to the match. And the national anthem will be performed in Ojibwe.

Geddes believes this would mark the first time the anthem has been sung in Ojibwe prior to any SIJHL match.

“I don’t think it’s ever been done before,” he said.

A  fireworks display outside the arena will cap off the evening.

“We’re sure hoping it’s going to be an annual event,” he said. “Our sponsor is excited about it and wants to keep it going.”