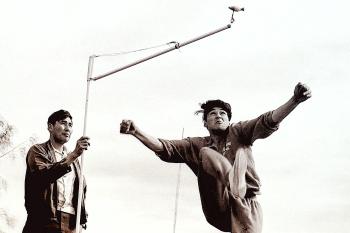 “These are ordinary Canadians who have achieved extraordinary things and have remarkable stories to share.” Cheryl Bernard, president and CEO of Canada’s Sports Hall of Fame
By Sam Laskaris
Local Journalism Initiative Reporter
Windspeaker.com

Edward Lennie had long been bestowed with the title Father of the Northern Games.

But his son Hans had long wished his late father, an Inuvialuit Elder who was known for promoting traditional Arctic Sports, would receive some additional recognition.

It was announced on May 12 that Edward Lennie is one of three builders who will be inducted into Canada’s Sports Hall of Fame in 2022.

He’ll be inducted posthumously into the hall during an awards ceremony scheduled for Oct. 6 in Toronto.

Hans, who lives in the Northwest Territories town of Inuvik, plans to attend October’s induction ceremony with his wife Billie.

Edward Lennie coached athletes in eight events, including the kneel jump, two-foot high kick and arm pull, at the inaugural Arctic Winter Games in Yellowknife in 1970.

The multi-sport Games continue to be staged every two years and include teams representing circumpolar peoples living in countries or communities bordering the Arctic Ocean.

Arctic Sports can be rather challenging for some participants, especially those just starting out in the various disciplines.

“It builds character and self-esteem,” Hans said, adding his father was well aware of some of the difficulties.

“One of the things with the kids he worked with was that they were not allowed to say ‘I can’t’. They had to at least try.”

Hans, who is the fifth of eight children, said his dad was also a father-like figure to dozens of others, including numerous young offenders.

“He had a cabin that he would take them out to and he got them involved with a trapper training program. It helped rehabilitate them. Some of those people who are now grown men are now mentors.”

Hans said his father was a role model for another reason.

“My father never drank and they respected that,” he said. “It goes a long way when you practice what you preach.”

Edward Lennie will be among some household names who will also be inducted into the hall of fame this year.

Wickenheiser is arguably the best Canadian women’s hockey player ever. She participated in six Olympics.

De Rosario is a former Major League Soccer star. Tavares, not to be confused with his nephew who shares the same name and is the captain of the NHL’s Toronto Maple Leafs, is one of the best lacrosse players produced in Canada. And McIsaac is a former swimmer who won a total of 28 medals, including 14 gold, at four Paralympic Games.

Besides Edward Lennie, two others will also be inducted via the Builder category this year. They are sportscaster Brian Williams, who retired this past December, and Tricia Smith, a former rower who competed in four Olympics and is now the president of the Canadian Olympic Committee.

The Chatham Coloured All-Stars, a men’s baseball team comprised of Black players, and the Preston Rivulettes, a women’s hockey squad, will be inducted through the Trailblazer category.

This is the first year that the Trailblazer category has existed.

“This is just such an honour, seeing him showcased in line with all of the other mainstream sports stars,” Hans Lennie said of his father.

Cheryl Bernard, the president and CEO of Canada’s Sports Hall of Fame, praised the class of 2022 inductees.

“These are ordinary Canadians who have achieved extraordinary things and have remarkable stories to share,” she said. “Through the lens of sport, these stories put a spotlight on important topics, personify resiliency and showcase overcoming adversity, changing the way each of us see the world and ourselves.”

All inductees have lengthy lists of accomplishments.

Though the 2022 induction ceremony will be held in Toronto, Canada’s Sports Hall of Fame is actually located in Calgary.