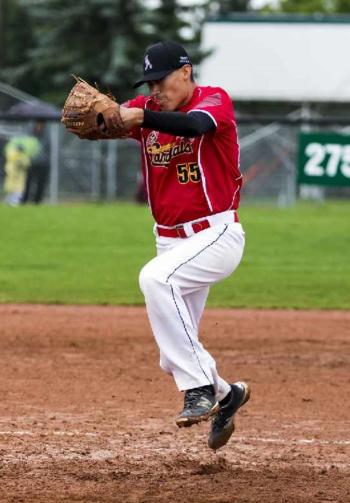 Last year's champions in the senior men’s division were the Westbank Cardinals. Photo by Sandra Crowfoot

Albert McNab is considerably busier these days as he prepares for next month’s Canadian Native Fastball Championships.

McNab is the coach of the Regina-based Golden Hawks who are hosting this year’s national tournament.

Organizers are hoping the event, scheduled for Aug. 3 to Aug. 6, will attract at least 80 clubs.

Besides preparing his own side for the Canadian championship and helping out with some organizational details, about a month ago McNab also took over as tournament director after another individual backed out.

“Things are going well,” said McNab, adding his cell phone has been ringing rather steadily as he fields a number of inquiries about the tournament.

The event is traditionally held in western Canada. As a result, tournament entrants most years represent clubs from British Columbia, Alberta, Saskatchewan and Manitoba.

But squads from a couple of eastern provinces might also be attending this year.

“We’ve had calls from junior teams in Quebec and one from Halifax that tell us they want to come,” McNab said. “Hopefully they can.”

The nationals will feature entrants in five categories.

Besides national bragging rights, clubs will also be hoping to win a share of the prize money up for grabs at the tournament.

The top four finishers in the senior men’s and senior women’s categories will be awarded some money.

The prize money that will be handed out in the other divisions will depend on how many clubs register for those categories.

All tournament matches will be held at Rambler Park, which features nine diamonds, or Kaplan Field.

“That’s probably one of the best diamonds in Regina,” McNab said of Kaplan Field.

As for the host Golden Hawks, they will be hoping home-field advantage will help them reclaim the national title they won four years ago.

The franchise, which was previously called the NB Petro Hawks, was forced to change its name this year to Golden Hawks after losing its main sponsor.

The Westbank Cardinals from Kelowna, B.C. have captured the national senior men’s crown in each of the past three years. Each time the Golden Hawks were the finalists.

McNab is well acquainted with a number of the players on his roster. The Golden Hawks’ lineup includes three of his sons – Calvin, Lyle and Ron. And two of his grandsons, Brandon McNab and Josh Montana, are also on the squad.

Josh Montana, who is a first baseman and pitcher, is gearing up for his third season with California’s Canada College squad.

The elder McNab loves the fact his sons and grandsons are all on the same team and can travel to tournaments together.

“It’s great,” he said. “We just jump into one vehicle or one van and we’re gone.”

The Golden Hawks have participated in a pair of tournaments so far this season.

For starters they placed third at a men’s event which included non-Indigenous squads at an event in Calgary last month. And in early July they finished second at a Native tournament staged in Prince George, B.C.

As in previous years, the nationals will feature a double-knockout format meaning teams must lose two games before they are eliminated from further action.

“It will be competitive,” McNab said. “Most of the teams will bring their best. This is one of the better Native tournaments around.”

Whether the Golden Hawks do indeed capture top honours in this event could very well depend whether they have the services of right-handed pitcher Scotty Lieph, who is from Victoria, B.C.

Lieph, who has suited up for the club in the past, is on the 40-man roster for the Canadian national club this season.

McNab is unsure whether Lieph will indeed be able to suit up for the Golden Hawks at the nationals because this summer he’s also toiling for a team in Kitchener, Ont.

Red Nation traditionally features some of the top women’s players from across the country and represent Alberta’s Alexis Nakota Sioux Nation.

The club is managed by Tony Alexis, the chief of the First Nation, and his wife Stephanie.