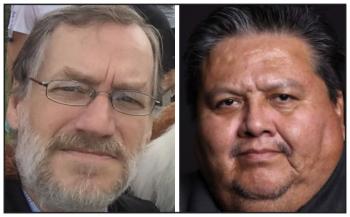 “First and foremost, we have to look at the safety of the players, the staff and the members of the community.” — Tyler White, the CEO of Siksika Health Services
By Sam Laskaris
Local Journalism Initiative Reporter
Windspeaker.com

The ongoing pandemic has pushed back an Every Child Matters game that the Calgary Hitmen of the Western Hockey League (WHL) were planning to stage this weekend.

The Hitmen were originally scheduled to host their game on Saturday, Jan. 15 against the Prince Albert Raiders.

While that WHL contest is expected to still go ahead as planned, the Calgary squad is now planning to host its Every Child Matters match on March 27.

Due to rising COVID cases throughout Alberta, Rob Kerr, the Hitmen manager of business operations, said it made sense to postpone the Every Child Matters outing until late March.

“We hope by then we’ll be out of the current surge and that we can host the game under normal circumstances,” he said.

Kerr said there was never any discussions about cancelling the Every Child Matters game this season.

“We didn’t go down that path,” he said. “We’re fairly confident we can get back to a place where we can host the game comfortably.”

The Hitmen play out of the Scotiabank Saddledome, the same rink as the National Hockey League’s Calgary Flames. Capacity at the rink is 19,289.

Current health regulations in Alberta, however, stipulate a venue can operate at only 50 per cent capacity.

While more than 9,000 fans are still allowed to attend Saturday’s scheduled match, Kerr said because of the pandemic, provincial regulations do not allow for any consumption of food or beverages during games.

During the team’s inaugural Every Child Matters game in February 2020, the facility had a test kitchen where traditional Blackfoot food was available for purchase.

The Every Child Matters match, held in partnership with the Siksika Health Services, aims to celebrate Blackfoot culture and amplify Indigenous voices.

Besides having Blackfoot food for purchase, off-ice activities planned for the contest included First Nations dancing and drumming.

Tyler White, the CEO of Siksika Health Services, a presenting partner of the Every Child Matters game, said it makes sense to postpone the outing for a couple of months.

“First and foremost, we have to look at the safety of the players, the staff and the members of the community,” he said.

White said game organizers were forced to comply with provincial authorities, who were capping attendance limits and for safety measures prohibiting the sale of food or drinks at games.

“Little by little it was being taken away,” White said.

White said organizers are keen to stage another successful Every Child Matters match, like the one held in 2020.
“We were able to put on such a special event,” he said.

And it is an event. Not just a hockey game.

“It’s much more than a game,” White said. “It transcends hockey. It’s really a showcase of our culture.”

White is confident postponing the match for 10 weeks will be beneficial. He’s hoping the pandemic, which has seen substantial increases in COVID cases across the country because of the Omicron variant this past month, will soon be on the decline.

“Nobody has a crystal ball,” he said. “But we hope to see a peak by the end of January or early February. And hopefully by the end of March we’ll be on the downside of things.”

Siksika Health Services had also teamed up with the Hitmen to organize the club’s first Every Child Matters contest.

Other partners this year include the Aboriginal Friendship Centre of Calgary, the Blackfoot Confederacy and Okaki.

The partners are collectively working to address stereotypes and racism. And they are eager to advance inclusion in communities via the promotion of Indigenous culture, language and history.

Another goal is promoting healthy lifestyles for all by showcasing the benefits of participating in sport.

Siksika Health Services and the Hitmen are hoping to stage an Every Child Matters game on an annual basis.

A partnership had been forged in January of 2019 when the Hitmen held one of their practices on Siksika Nation, located about an hour’s drive southeast of Calgary.