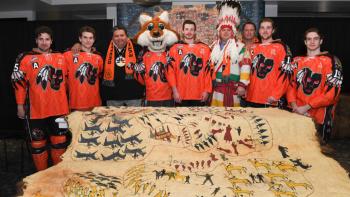 The Every Child Matters game jersey was designed by artists Jacob Alexis and Richard Running Rabbit. Hosted by the Calgary Hitmen, the match will take place March 27. Photo by Candice Ward.

“Since Every Child Matters has come out, the national holiday, since Orange Shirt Day has gained more traction, people I’ve grown up with my entire life have approached me and said, ‘I had no idea.’ And that’s not by accident. That’s on purpose.” — Siksika Nation Councillor Samuel Crowfoot
By Sam Laskaris
Local Journalism Initiative Reporter
Windspeaker.com

Orange Shirt Day founder Phyllis Webstad will be in attendance this weekend for the Every Child Matters game hosted by the Western Hockey League’s Calgary Hitmen.

Details for the match, which will be held on Sunday, March 27, were announced at a press conference last week.

“I’m very excited to attend the March 27th game hosted by Siksika Health Services and the Calgary Hitmen to raise awareness of the history and legacy of residential schools and the Every Child Matters movement,” said Webstad via video link.

The Swift Current Broncos will provide the opposition for the Hitmen in Sunday’s match.

The Every Child Matters contest had originally been scheduled for Jan. 15, but team officials opted to postpone the game until this weekend because of the rising number of COVID-19 cases in Alberta early this year.

Hitmen officials felt they could provide a better sense of normalcy at the game by pushing back the event a couple of months.

Siksika Nation Councillor Samuel Crowfoot was among those who spoke at last week’s press conference.

He’s hoping the Every Child Matters contest is an educational experience for those who attend.

“I hope that the exiting message or the message that they leave with is awareness of what happened and the reasons behind it,” he said.

A pair of artists, Jacob Alexis and Richard Running Rabbit, helped design the Every Child Matters jersey that Hitmen players will wear in the game, which will be staged at the Scotiabank Saddledome, home of the National Hockey League’s Calgary Flames.

“This is an amazing, gorgeous jersey,” Crowfoot said. “But the reason for it is not something that we should be proud of as Canadians. It was really a genocide, a cultural genocide. It was vile colonization that deceived and deprived the language and the culture from the Indigenous inhabitants of this country.”

“I grew up on Siksika,” he said. “I attended high schools in Okotoks and Strathmore. And since Every Child Matters has come out, the national holiday, since Orange Shirt Day has gained more traction, people I’ve grown up with my entire life have approached me and said, ‘I had no idea.’ And that’s not by accident. That’s on purpose.”

Crowfoot said the educational system in the country is to blame for that.

“Curriculums are formed and they are political weapons that can be used to sway or deceive a population,” he said. “So, what I’m hoping for is widespread education and increased awareness from people who walk away from us. It’s not just a cool jersey. It’s more than that.”

Mike Moore, Hitmen vice-president and alternate governor, admits he was among those who was not previously well informed of the country’s true history involving Indigenous peoples.

“I wasn’t as educated,” he said. “I didn’t have an understanding of Blackfoot culture, of First Nations, of the residential school challenges and issues.”

But he’s been learning more and more thanks in part to Tyler White, the CEO of Siksika Health Services, a partner of the Hitmen’s Every Child Matters game.

“Tyler has literally led me down the path to understanding and truth and education,” Moore said. “He’s a brother and a friend. I said from Day 1, ‘tell me, teach me, correct me, educate me’. And he continues, with the people of Siksika, to show us their culture and extend a hand and an arm out. It’s a special friendship and a special relationship. And if we can provide even a portion of the understanding of the education and of the meaning of what it is and the culture then we’ve made a little bit of a mark in the movement. So much more needs to happen.”

A large Indigenous contingent is expected for Sunday’s outing. Moore is hoping the team’s non-Indigenous fans also come out in massive numbers to support the match.

“I encourage our fans to get to the rink because it is not just about hockey but about culture and education and understanding,” he said. “We hope we can have as many people as people in the Saddledome on the 27th, not just to watch a hockey game but to share in what we’re trying to understand and educate and promote.”