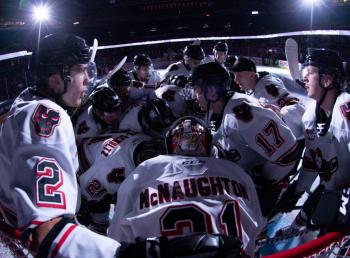 The Calgary Hitmen ready to take on the Red Deer Rebels on Feb. 1. Listen Live on Windspeaker Radio. Photo by Candice Ward.

“We decided early on that it was important that our culture was represented in various aspects of this game.” — Tyler White, CEO of Siksika Health Services
By Sam Laskaris
Windspeaker.com Contributor
CALGARY

History will soon be made at a hockey game in Calgary. The ‘Every Child Matters’ game between the host Calgary Hitmen and the visiting Red Deer Rebels will be broadcast live Feb. 1 on Windspeaker Radio in the Blackfoot language, the first time in WHL history.

The Hitmen joined forces with the Siksika Health Services and as well as the First Nations Health Consortium to dedicate the game to Indigenous youth empowerment through sport.

“It’s exciting as it will allow the Indigenous language to be broadcast on an entire network,” said Bert Crowfoot, the founder and CEO of the Aboriginal Multi-Media Society, which includes Windspeaker.com and Windspeaker Radio.

Crowfoot said it is difficult to speculate exactly how many people will tune in for the Blackfoot broadcast of the Hitmen game. He guesses the number could be in the 20,000 to 30,000 range for listeners.

Crowfoot believes many individuals who do not actually speak Blackfoot will also be tuning in.

“I think they would do it out of curiosity,” he said.

A pair of Siksika Nation residents will be working on the broadcast. Francis (Butch) Wolfleg will do the play-by-play while Stuart Breaker will provide the colour commentary.

Also, Jeremy Harpe, assistant program director of Windspeaker Radio, will be part of the broadcast, interviewing guests during the intermissions.

Crowfoot said the Blackfoot language does not include hockey terms such as the words ‘hooking’, ‘slashing’ and ‘offside’ or the phrase ‘he’s on a breakaway’.

“They have to be very descriptive describing these things,” Crowfoot said of the duo who will work the broadcast. “It’s a real art. Not anybody can do this.”

The Hitmen relationship with Siksika Nation began last January. The Calgary franchise staged one of its practices in Siksika Nation.

Representatives from the hockey club and First Nation agreed to continue to grow their relationship, hence the announcement of next month’s Every Child Matters match.

“We are proud of the relationship that has been created and want to make sure we find as many opportunities to promote the cause and message as possible,” said Rob Kerr, the Hitmen assistant manager of business operations.

Earlier this season the Hitmen had another first, broadcasting one of their games in Punjabi.

“This is another opportunity for us to make the statement that hockey is for everybody,” Kerr said.

Kerr is confident his team’s ties to the Siksika Nation will continue.

“This is an important game and partnership,” he said. “But it’s just the beginning as we continue to look at ways to connect with the nations and people of the Blackfoot Confederacy. The Calgary Hitmen have always prided ourselves on our community involvement. It’s who we are. It’s the expectation of our ownership and our fans.  We benefit because we get to learn from this amazing partnership and help share it with our friends in the league and the community.”

Kerr added the broadcast will live on long after the game has ended.

“We are excited that the audio from this broadcast can be used by teachers and educators to help kids and fans alike learn the Blackfoot language,” he said. “Hockey is a great game and lends itself to storytelling and that’s a very exciting byproduct that can live well beyond the game day.”

Tyler White, the CEO of Siksika Health Services, confirmed a partnership has been forged with Siksika-based Old Sun Community College as well as the Blackfoot Crossing Historical Park, located at Siksika Nation, so that the recorded broadcast can be utilized as a learning tool.

“We decided early on that it was important that our culture was represented in various aspects of this game,” White said. “By providing play-by-play commentary in Blackfoot, we are able to share our language with a larger audience in Alberta.”

The Hitmen is one of 22 clubs that participate in the WHL. The squad plays its home contests at the Scotiabank Saddledome, the same rink that is the home to the Calgary Flames of the National Hockey League.

Besides being broadcast on Windspeaker Radio, the game will be televised nationally on TV on Sportsnet.