Eskasoni’s Junior B hockey team proving to be a hit 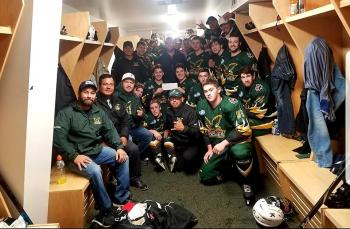 “People said nobody would go to our games and it would be a waste of money.” — Eskasoni First Nation Chief Leroy Denny
By Sam Laskaris
Windspeaker.com Contributor
ESKASONI FIRST NATION, N.S.

The Eskasoni Junior Eagles have managed to silence their doubters.

The Junior B hockey squad, which plays its home contests at the Dan K. Stevens Memorial Arena at Eskasoni First Nation, has become a hit in its community.

The club had its share of struggles during the 2018-19 campaign, its inaugural season in the Nova Scotia Junior Hockey League (NSJHL). Eskasoni managed to win just eight of its 32 regular season matches and failed to qualify for the league playoffs.

As for this season, the Junior Eagles improved their record to the 12-19-3-0 mark, good for fourth place in the league’s six-team Sid Rowe Division.

The Junior Eagles are currently squaring off against the divisional leaders Antigonish Munro Junior Bulldogs in a best-of-seven divisional semi-final series.

The Antigonish squad doubled Eskasoni 4-1 in the series opener this past Friday. The Eagles, however, managed to tie the series by registering a 7-4 victory in their first ever home playoff contest the following night.

The series resumes with Game 3 on Tuesday at the Antigonish Arena.

Eskasoni First Nation Chief Leroy Denny also serves as the Eagles’ president. He admits many people doubted whether the franchise would be a viable option.

“People said nobody would go to our games and it would be a waste of money,” Denny said.

But the Eagles have managed to attract a solid fan base, with about 350-400 fans showing up for most home matches.

Denny felt there was a need for a junior hockey franchise in his community.

“We needed something that the whole community could benefit from,” he said.

The Eagles were also founded at the right time as the NSJHL had an uneven amount of entrants.

Eskasoni was unanimously voted into the league.

But the inaugural campaign did not go as smoothly as hoped for, especially with the team’s record.

“The first year was tough,” Denny said. “It was a learning curve for us.”

Denny said the team’s operating budget for one season is about $70,000. It’s a dollar figure the club can attain.

The Eagles have even managed to have a profit in their first two seasons.

“Last year we broke even and we had a little bit of a surplus,” Denny said. “And this year we’ll make a little bit especially since we made the playoffs. That’s where you make your money.”

Denny believes the Eagles are providing more than just an outlet for members of his First Nation to watch some Junior B hockey.

“It’s amazing for us to express our language as well,” he said.

Indigenous music is played throughout the Eagles’ home games, not only during intermissions but also while there are breaks in action.

Eskasoni’s roster is a mixture of Indigenous and non-Indigenous players from surrounding communities.

Almost half of the club’s lineup is from Eskasoni First Nation. The Eagles also have a player from Millbrook First Nation.

Denny believes it’s vital to have these individuals playing for the Eskasoni side.

Denny also thinks that the Eagles’ future is pretty bright.

Denny though thinks the Eskasoni side can still have a lengthy playoff run this year, even though it is facing Antigonish, a team that finished atop not only the divisional standings but first over-all in the NSJHL.

The Eagles and Bulldogs met four times in regular season action. Eskasoni managed to win one of those matchups. Though Antigonish emerged victorious three times, two of those contests were in overtime.

As Saturday’s playoff win over the Bulldogs attests, the Eagles are capable of having some post-season success.

“We can play with all the top teams,” Denny said. “I really believe if the boys choose to work together and work shift by shift, we can go all the way to the championship this year.”