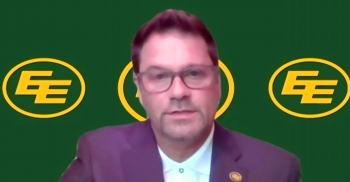 “Going forward, we want the focus to be on the work we do in the community and our team’s excellence on the field as the CFL’s most successful franchise.” —Janice Agrios, chair of the Board of Directors of the EE Football Team
By Adam Laskaris
Local Journalism Initiative Reporter
Windspeaker.com

After weeks of whispers, reports, and various levels of consultations, the Canadian Football League’s Edmonton franchise has made a long-discussed decision to change its name. That decision was made official in an announcement today.

On Tuesday, Edmonton’s CFL team announced it had dropped the word Eskimos from its name, with immediate plans to transition to the moniker “EE Football Team” until a new name can be determined.

The move was “welcomed” by Inuit Tapiriit Kanatami, who released a statement stating that “ITK has consistently maintained that ongoing use of the team’s name is damaging to Inuit and to reconciliation.”

ITK acknowledged input from “Inuit youth to corporate sponsors and Canadian citizens who saw an injustice and felt compelled to speak out,” adding “Your voices have brought us here.”

The football team had been known by the old name, which many found offensive, since 1949. The process and timeline to determine a new name has yet to be established by the team’s board of directors.

“We feel it is important to make this change in response to the findings of our recent engagement and research,” said Janice Agrios, chair of the board of directors, in a statement published on the CFL’s website.

“Going forward, we want the focus to be on the work we do in the community and our team’s excellence on the field as the CFL’s most successful franchise.”

Criticism of the team’s handling of the decision to change its name included faulting a recent survey distributed to fans that repeatedly and unnecessarily referred to the now-defunct name. The survey also included a question asking if there was “too much ‘cancel culture’ today.” The term means withdrawing (canceling) support of people or companies after they have done something some consider objectionable.

Another common point of opposition has been the team’s putting monetary interests over principled ones.

Despite years of open condemnation of the team’s name, the change was made only after sponsors, including insurance firm Belairdirect and gaming company Sports Book Interaction, threatened to pull financial contributions to the team.

University of Alberta Indigenous Studies instructor and Inuk author Norma Dunning has been a long-time advocate of the name change.

“I’m very grateful to the stakeholders and the sponsors who threatened to remove their support,” she said. “Money talks, and that’s absolutely fine with me.”

The team had been undergoing an “extensive research and engagement process” since 2017, but increased pressure had mounted in recent weeks after the National Football League’s Washington team announced a change of its name last week.

“I found it very odd how hesitant they were [to change the name],” Dunning said. “I was pleased. Good. Finally!”

Dunning suggested that small steps like the franchise creating scholarships towards Inuk post-secondary students within the province could be a positive step in restoring the team’s relationship with the Indigenous community. “$1,500, that goes a long way when you’re a student,” Dunning said.

Dunning advised against any potential new name having Indigenous roots, adding that it was a great opportunity for the team to rebrand.

Recently, former National Hockey League player Jordin Tootoo, an Inuk player who grew up in Nunavut, described acceptance by some Inuit of the former Edmonton team name in terms of a generation divide.

In a statement posted on Twitter earlier this month, Tootoo wrote: “My father’s generation connects to this term to describe who they are. My generation refers to itself as Inuk.”

There has been no change announced to the team’s logo, colour scheme or jersey.  From a rebranding standpoint, much of the team’s official merchandise and overall image may remain mostly intact if the franchise chooses another “E” word to include in its name.

"I can tell you that we sure love our green and gold and double E," team president Chris Presson said. "It’s early days but we hope to keep that iconic logo.”

Unlike American professional franchises in Cleveland, Washington, Chicago, Kansas City, and Atlanta, the Edmonton team did not prominently feature Indigenous imagery in its logos or team branding. The team did integrate a polar bear into its logo for a short while, from 1996-97, according to sportslogos.net.

The CFL also announced Tuesday that Winnipeg was chosen as a preliminary “hub city” where the entirety of the 2020 season could potentially be completed starting in September, pending the approval of health and safety officials.

The City of Edmonton is currently preparing to be a host for the NHL’s return to play, and it is a near certainty there will be no official home football games in Alberta in the immediate future.