Curling is in the blood of Lee Merklinger and her siblings 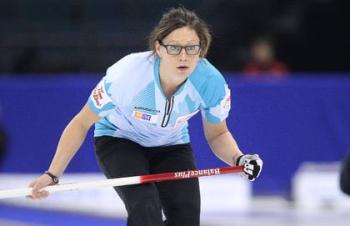 When she has a bit of spare time on her hands, Lee Merklinger of Muscowpetung First Nation (Fort Qu’Appelle, Sask.) would love to teach the nuances of curling to Indigenous youth.

“That’s one of the reasons why I took my Masters in Sports Psychology. I want to work not only with Indigenous kids but with kids from minority communities that don’t have access to curling.”

Merklinger, who lives in Nepean, Ont., is one of the country’s elite curlers. For the past eight years she has competed at provincial, national and international competitions with a rink skipped by Sherry Middaugh.

Though she is not quite ready to give up elite curling, Merklinger is not sure what is in store for her in the immediate future.

Middaugh’s squad competed in its share of events from September through December. It is now waiting to see if its season is indeed over or whether it will be invited to some big-money bonspiels in the coming weeks.

One thing for sure, however, is that Middaugh’s team will be disbanding at the end of the 2017-18 campaign.

Middaugh, who is married to men’s star curler Wayne Middaugh, will be taking some time away from the sport.

“Sherry wants to spend some more time with her kids,” Merklinger said.

As for Merklinger’s two other teammates, lead Leigh Armstrong and third Jo-Ann Rizzo, they are looking to form another squad for next season.

Merklinger will not be a part of that team. In fact, there’s a chance she won’t be playing anywhere.

Merklinger and her husband Conor MacDonald currently have one child, son Parker, who is turning two later this month.

Merklinger has had her share of success with the Middaugh team. A highlight was in the 2014 Canadian Olympic trials in the championship game. She lost to a team skipped by Jennifer Jones.

Jones went on to lead her club to the gold medal at the 2014 Winter Olympics in Sochi, Russia.

“Ever since we’ve been in the Top 10 in curling in Canada,” said Merklinger, who has managed to juggle her successful curling career while maintaining her day job.

Since 2009 she has been working in the nation’s capital as a policy analyst with Indigenous Services Canada (formerly Indigenous and Northern Affairs Canada).

She landed a full-time job with the department following a stint there working as part of an experience program for Aboriginal students.

Merklinger earned her undergrad degree in Psychology at the University of Ottawa. She then earned her Masters degree from the university graduating in 2009.

Since she has a German last name, Merklinger admits not too many people are aware of her Indigenous background.

Her grandmother was at the Qu’Appelle Indian Residential School in Lebret, Sask.

Merklinger’s twin sister Breanne was also an elite curler. But for the past half dozen years or so she has just been playing the sport recreationally.

The Merklingers also have three half siblings, who were also heavily involved in the sport. (Same father, but different mother, and not Indigenous.)

She is currently the CEO of Own The Podium, the Canadian program which aims to get athletes winning Olympic medals.

Anne Merklinger was with the Canadian contingent for this year’s Winter Olympics in South Korea. She will remain in the country with the Canadian delegation for the Winter Paralympics, which run from March 8 to March 18.

Lee Merklinger’s half brother David is a curling ice maker in Kelowna, B.C. while another half brother Bill, who previously represented the Northwest Territories at the men’s nationals, is now retired.