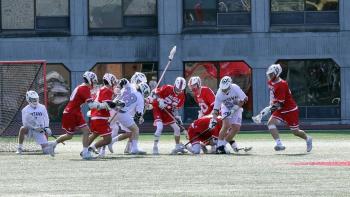 MGill University has five Indigenous players on its team for this weekend's national tournament. Photo by Derek Drummond.

Several Indigenous players will be among those hoping to lead the McGill men’s squad to a national lacrosse championship this weekend.

Cree, who is a rookie with the McGill squad, had been sidelined the entire 2019 campaign as he recovered from knee surgery.

Tim Murdoch, who has served as McGill’s head coach since 2003, said there will also be plenty of Indigenous commemorations at this year’s tournament.

“We’re trying to install appropriate Indigenous themes as a reminder this is the Creator’s game,” Murdoch said.

For starters, there will be a land acknowledgment at Friday’s opening ceremonies. It will be noted that McGill University is situated on land that has long served as a site of meeting and exchange amongst Indigenous peoples, including the Haudenosaunee and Anishinabeg nations.

Also, game award players from each game and from both squads will receive traditional wooden mini-sticks designed by Mohawk Lacrosse, a company based in Akwesasne, Ont.

Murdoch said tournament organizers received a total of 24 mini-sticks. Besides awarding the sticks to the players of the team, those named to the tournament all-star squads are also expected to receive them.

McGill officials are also expected to acknowledge at some point during the tournament some details of a scholarship fund, which raised about $100,000 and is now endowed, for its Indigenous members on the lacrosse team.

“They just want to recognize the candidates,” Murdoch said of the five Indigenous players on his roster. “They’re all strong candidates.”

Indigenous student/athletes on McGill’s team will need to maintain a certain grade-point average in order to be considered for a portion of the scholarship money, which is expected to be announced later in the 2019-20 academic year.

Organizers of the national tournament had originally also considered honoring the game’s Indigenous past by staging a recreation of a game from yesteryear this weekend. Those plans, however, were nixed.

“There’s a lot of moving parts to this,” he said of the three-day event. “But I’m focused on the coaching.”

McGill is one of the favourites heading into the tournament as it is sporting a perfect 10-0 record this season.

McGill has an opening-round bye and does not play its first match until Saturday at 1 p.m. It will square off against the winner of Friday’s quarter-final battle between the Western Mustangs from London, Ont., and the Nipissing Lakers from North Bay, Ont.

“We’re ready and we’re excited,” Murdoch said of his club.

The McGill coach also likes the fact Western and Nipissing will be playing their Friday night contest at 8 p.m. and the winner must be on the field again for a semi-final match about 15 hours later.

“That’s a pretty quick turn time as well,” Murdoch said. “We feel we should be a little bit more rested.”

Murdoch said he has been impressed with the efforts of the Indigenous players on the McGill roster this season.

McKay, Kane and Zawata are expected to be in McGill’s starting lineup for its semi-final on Saturday.

Kirby, who transferred to McGill last year after playing three seasons at the University of Albany, certainly also has enough talent to crack McGill’s starting lineup. But several other commitments prevent him from achieving that status.

Besides having a full course load of Sociology courses, Kirby also has a part-time job.

“Frankly I don’t know how he does everything,” Murdoch said. “He’s the busiest athlete we have by far.”

Murdoch added Kirby does receive his share of game action.

“We can put him into the game at key moments,” he said.

Murdoch added McGill is keen to recruit more Indigenous students to its school in the coming years.

“If I had to guess I’d say the school has around 100 (Indigenous students now),” Murdoch said. “And our team has five per cent of them.”