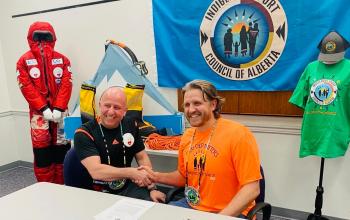 Four years ago, Leo Namen suffered a heart attack. He was told that much of his heart had stopped working for 47 minutes and he would need a heart transplant to recover.

“It was a difficult time of course,” Namen said. “According to doctors and surgeons I was not going to be able to ever be okay again.”

Namen is now more than okay. In fact, the 52-year-old Edmonton resident left for Nepal on Saturday, April 2, to begin preparing for his quest to scale Mt. Everest.

Namen was in his hometown at a press conference two days earlier on March 31 to announce he will be partnering with the Indigenous Sport Council of Alberta (ISCA) for a future climb. He plans to reach the highest point of Mt. Denali in Alaska in June 2023 while raising awareness of ISCA programming and funds to support Indigenous peoples participation in them.

“We’re just so excited with the opportunity that this has to bring support for our cause and for what we do with programming to reduce barriers and provide more opportunities for Indigenous people in Alberta,” said ISCA’s executive director Jacob Hendy.

Namen plans to scale the highest mountain on each of the seven continents over the course of seven years. Each time he will partner with an organization to raise awareness of their cause and funds for that group.

Namen has joined forces with the Heart and Stroke Foundation for his Mt. Everest climb.

Namen said he has full support of doctors to continue climbing mountains.

“Technically, I recovered completely,” he said. “My heart recovered to 99 per cent what it was before.”

Namen believes he could have climbed the seven summits on his wish list in either two or three years. But he is purposely spacing them out to better fundraise for each cause he’s supporting.

Namen, a native of Colombia, arrived in Canada with his wife and four children as refugees 20 years ago.

“I had the opportunity a few weeks after I came to Canada to see the need in Indigenous communities everywhere we went,” Namen said.

And he said he knew back then he would be looking for ways to repay those in his new home, including Indigenous peoples.

“This is my honour now,” he said. “The land that you guys offered to me and my kids 20 years ago that I will be able to give back to you.”

Hendy, who only met Namen a few weeks ago, is thrilled that he is willing to assist the ISCA.

“He has a great heart,” he said. “He has a great strong desire to be part of reconciliation in doing what he can with his abilities and his gifts to support Indigenous peoples where he lives.”

“This opportunity for us is so huge to be able to meet different partners that Leo has, those that want to be part of reconciliation and provide their support in a good cause.”

Namen stressed the money he will help raise for ISCA will not simply be put towards mountaineering initiatives.

Namen is expected to be joined by a pair of Indigenous people, one female and one male, when he climbs Mt. Denali next year.

After he returns from Nepal, Namen and ISCA officials will begin the process of identifying the two Indigenous individuals who will be chosen to train with him during the course of the next year and then head to Alaska with him next June to scale Mt. Denali.

“I’m super excited and this is going to open up a lot of doors for Indigenous peoples,” Hendy said.

Namen had attempted to scale Mt. Everest last April. But he didn’t accomplish his goal then.

“I trained for everything, my heart was perfect, my acclimatization was amazing,” he said. “They called me the Canadian Sherpa because I had the best oxygen saturation. Everything was right. The only mistake we made was in water and food.”

Since he was paying out of pocket and on a low budget, Namen said he didn’t have high quality food or water with him during last year’s excursion. He ended up with cholera and spent 17 days trying to get rid of his infection.

After being eventually evacuated to Katmandu for treatment, Namen was told it would cost him $8,000 (U.S.) to start his climb again, a figure he couldn’t afford to pay.