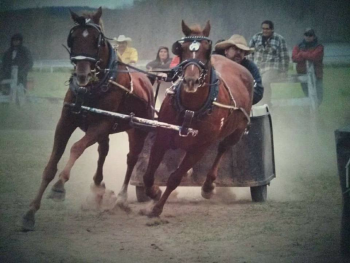 The Prince Albert Pony Chuckwagon and Chariot Association is back in action starting today with an 11-day event in One Arrow First Nation in Saskatchewan.

“Our racing community is close. We’re family oriented. When there are no events people are wondering how everybody is doing.” — Annmarie Tarry, the vice-president of the Prince Albert Pony Chuckwagon and Chariot Association
By Sam Laskaris
Local Journalism Initiative Reporter
Windspeaker.com

The Prince Albert Pony Chuckwagon and Chariot Association has been staging events throughout Saskatchewan for the past 45 years.

But as the association marks its return to action today, July 7, with an 11-day event at One Arrow First Nation, Sask., there will also be another major focus in addition to the racing and various cultural activities.

Organizers have decided to call the event, which continues until July 18, Running For A Cause to raise awareness about missing and murdered Indigenous women and girls.

“Running For A Cause has hit home to members and is helping everyone grow stronger,” said Annmarie Tarry, the vice-president of the Prince Albert Pony Chuckwagon and Chariot Association.

Tarry said about 90 per cent of the association’s members are Indigenous, but its events are open to all.

“We want all cultures to understand what the First Nation culture has lost,” Tarry said.

The One Arrow event, which will be held at the First Nation’s racetrack, marks the first event for the association since 2019. It was unable to organize any events in 2020 because of the COVID-19 pandemic.

Tarry said this marks the first time in the organization’s history that one of its events has been dedicated to a specific cause.

“Some of our First Nations (in Saskatchewan) still have missing women and girls,” Tarry said. “So that’s why we want to bring awareness to this.”

The One Arrow First Nation event will include one evening, July 15, when family members of five missing or murdered Indigenous women will tell stories of their loved ones.

Before the pandemic hit, the Prince Albert Pony Chuckwagon and Chariot Association would stage at least 10 events annually across the province, including about 40 days of racing.

Because of the late start to its 2021 schedule, this year’s programming will be significantly shortened.

There are also plans to stage an event in Duck Lake in September at the Beardy’s and Okemasis’ Cree Nations.

Though it is an 11-day festival, the One Arrow First Nation event will include nine days of racing. Besides Saskatchewan, entrants in various categories will also travel from Alberta and Manitoba.

Tarry said there will be $3,000 in prizes available for each day of racing.

Those who are unable to attend the event can watch the action via a live Facebook stream available at https://www.facebook.com/Prince-albert-pony-chuckwagon-and-chariot-association-105054971314178

Tarry said association events this year will be less lucrative than they were in the past.

“A lot of our sponsors have fallen through because of COVID,” she said. “And they didn’t really know what we’d be doing this year.”

Tarry anticipates the association will be able to build itself up once again in 2022.

“Next year things will be bigger,” she said.

Because of the pandemic, Tarry is not sure just how many people will attend the One Arrow event.

But she is not anticipating such numbers for this event.

“We’re hoping to have between 500 to 1,000 people per day,” Tarry said. “But it’s really hard to tell for us, because we now have the Delta,” a variant of the COVID-19 virus circulating around the world.

She believes the event will have added significance since it will be the first one since the pandemic began.

“Our racing community is close,” she said. “We’re family oriented. When there are no events people are wondering how everybody is doing. This is going to be huge. It’s going to be real social event for everybody.”

Tarry said some of the best entertainment will be provided in the event’s little tyke rodeo, featuring participants age 10 years of age and younger. This segment runs July 16 to July 18.

Children will compete in events including goat tipping, mutton busting and a wild horse race.