Canadiens’ star goaltender hopes to return to action this season 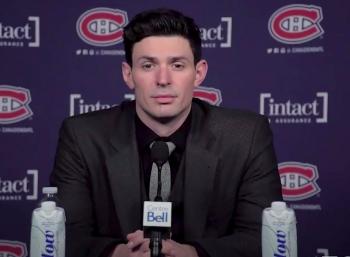 “I’m tremendously grateful for all the support I’ve received from not only the fans but the Montreal Canadiens themselves…” — Carey Price
By Sam Laskaris
Local Journalism Initiative Reporter
Windspeaker.com

Montreal Canadiens’ goaltender Carey Price spoke to media Sunday for the first time in more than half a year.

Mere days before the 2021-22 campaign began, team officials announced Price would be entering a players’ assistance program offered through the NHL and its players’ association.

Price, 34, a member of Ulkatcho First Nation in British Columbia, entered the program voluntarily to focus on his mental well-being and for his admitted substance use.

“It was very difficult,” Price said of his decision to ask for help and leave the team. “I was in a position where I definitely needed to reach out and it was a trying time for sure. At the end of the day it was one that needed to be made and, ultimately, it was one that was successful. And I’m very thankful for the help that I got.” It is believed that Price spent one month in a rehabilitation facility.

There’s no denying when he’s at the top of his game, Price is one of the top goaltenders in the National Hockey League, but he has not been able to return to the Montreal lineup because of ongoing issues with knee surgery that he had during the off-season.

This past summer Price was one of the main reasons the Canadiens advanced to the Stanley Cup finals, though they were defeated by the Tampa Bay Lightning 4-1 in the best-of-seven championship final.

The Stanley Cup finalists have struggled this season, partly due to Price’s absence. As of Monday, the Canadiens were sporting a record of 8-29-7-0, the worst mark in the 32-team league.

“I know it’s been a frustrating time for everybody,” said Price, who before Jan. 30 had not spoken to the media since the final game of the Stanley Cup series this past July.

“It’s been one for me as well. It’s been a long year. And I know there’s a lot of frustrations out there. Everyone out here is trying their hardest. Everybody is putting in the work and doing their best.”

Price said he is hoping to be available for game action with Montreal at some point this season.

“Yes, it’s definitely an objective for me this season,” he said. “It’s always been my goal, ever since I got back here. Obviously, I’ve had a couple of setbacks that weren’t foreseen.”

Price said he is anxious about the next couple of weeks. Tests and treatment will determine how his knee is responding and whether he will be available for action any time soon.

Price did skate with full equipment on the weekend, both Saturday and Sunday.

“There’s a lot going on in the next couple of weeks that will determine my season,” he said. “I’m obviously a little bit anxious myself to find out some answers. I don’t have them right now but we’ll find out soon enough.”

Some have speculated that Price might not ever be able to return to his previous form. And others think there’s a chance he will never play another NHL match.

“There’s a lot of things to ponder on in your future,” he said. “We can just keep hammering away about what do you think about your future. I don’t know. I’m not a fortune teller so I’m just trying to stick to the process that’s at hand, and that’s trying to get back on the ice and see how I feel when I get back into a game situation. Until that happens, I can’t really give you a perspective.”

Price, who is in his fourth season of an eight-year, $84 million contract that he signed with the Canadiens, has a no-trade clause in his deal.

Considering the Montreal franchise is in a rebuilding mode now, he was asked whether he would consider waiving his clause and accept a trade.

“Me and my family are very happy here,” he said. “We’re settled in. This is our home. There’s a reason why I signed a contract like I did here, the no-movement clause was to be here. So as of right now, I have no plans to move anywhere.”

Price was asked about his decision to enter the players’ assistance program and whether being a role model was a factor in choosing to do so.

“That is the first step for a lot of people,” he said. “It’s not an easy one to make. I’ve seen a lot of people struggle with issues in my personal life.”

Price said he has had plenty of support this season.

“I’m tremendously grateful for all the support I’ve received from not only the fans but the Montreal Canadiens themselves, my teammates and obviously my family,” he said.

“I’ve had quite the journey obviously at the start of this season and it would have been a lot more difficult if I hadn’t had such a warm sense of encouragement from everyone.”