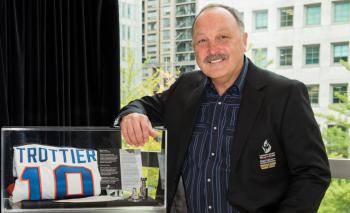 “The goal for us in the first year is to reach one million youth.” — Cheryl Bernard, the president and CEO of Canada’s Sports Hall of Fame
By Sam Laskaris
Local Journalism Initiative Reporter
Windspeaker.com

Officials with Canada’s Sports Hall of Fame are continuing their quest to raise awareness and amplify the voices of some of its Indigenous inductees.

Last year the Calgary-based hall launched its We Will Do Better project. The goal of this digital,

storytelling campaign was to bring awareness to the role racism played during the careers of Indigenous, Black and Asian hall of famers.

Video stories of nine athletes, including Waneek Horn-Miller (Mohawk), who was a co-captain of the Canadian women’s water polo squad that competed at the 2000 Sydney Olympics, can be viewed here:

Hall officials also hosted an Indigenous Summit this past October. This summit, which was staged virtually because of the COVID-19 pandemic, included the six living Indigenous hall of famers as well as family members of the eight other Indigenous individuals who have been inducted but who are now deceased.

“The feedback we had from our (Indigenous) hall of famers was amazing,” said Cheryl Bernard, the president and CEO of Canada’s Sports Hall of Fame.

Discussions from that week-long summit enabled hall officials to develop a 10-year vision for their Indigenous Sport and Reconciliation ventures.

To that end, a pair of new projects were announced this past week.

For starters, the Indigenous Sports Heroes Education Experience will be released on Aug. 9. This project, a digital multi-media exhibit, is being released purposely that day to coincide with the International Day of the World’s Indigenous Peoples.

“It’s a multi-media book,” said Bernard, an elite curler who skipped the Canadian women’s rink to a silver medal at the 2010 Winter Olympics in Vancouver. “You can learn in different ways at different levels.”

Various videos, stories and artifacts pop up throughout this digital display.

The Indigenous Sports Heroes Education Experience is geared towards all students from Kindergarten through to Grade 12.

The project will be made available for free to all school boards across Canada starting this September.

Bernard said there are currently about five million students across Canada in grades up to Grade 12.

“The goal for us in the first year is to reach one million youth,” she said.

A second Indigenous-themed project hall officials plan to start rolling out this September is the Beyond The Win program.

This goal of this initiative is to have virtual teaching sessions for school-aged children, both at the elementary and high school levels, involving Indigenous hall of famers. These sessions will be held in the inductee’s hometown and surrounding communities.

During these sessions the hall of famers will discuss their careers and also talk about various topics, including goal setting and overcoming adversities.

Wilton Littlechild, who was inducted into Canada’s Sports Hall of Fame in 2018 via the Builder category, will work with hall officials for the pilot project. His story will be told to students in his home community of Hobbema, Alta. and in surrounding locations, starting this September and continuing until December.

Littlechild attended residential schools from 1951 to 1964. An exceptional athlete, he was later a member of the University of Alberta men’s hockey and swim teams.

He became the first First Nation person from Alberta to become a lawyer and later served as a federal politician for the riding of Wetaskiwin-Rimbey from 1988 to 1993.

Bernard is pleased hall officials have now announced details on a pair of upcoming Indigenous initiatives.

“The whole summit allowed us to lay the groundwork to bring out these projects,” said Bernard, who also represented Canada at the 2018 Winter Olympics in PyeongChang, South Korea.

Hall officials believe they can do their part to support reconciliation by having both Indigenous and non-Indigenous individuals be inspired by and learn from the stories of Indigenous hall of famers.

After Littlechild’s involvement later this year, hall officials plan to include the stories of seven-time Stanley Cup champion Bryan Trottier and cross-country skier Sharon Anne Firth as part of their Beyond The Win program.

Bernard said those who attended last year’s summit stressed it was important to get out the full stories of all Indigenous athletes who will be profiled in upcoming projects.

“There could be no whitewashing of information,” Bernard said, adding it is vital to include all experiences hall of famers endured, even the negative aspects. “It had to include the truth.”

Besides Horn-Miller, Littlechild, Trottier and Firth the other Indigenous hall of famers who are alive are Alwyn Morris and Collette Bourgonje.