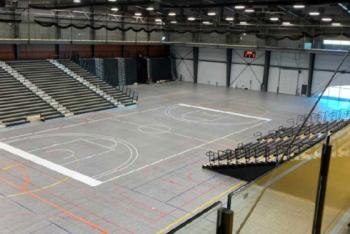 It's expected that if Alberta wins the 2027 NAIG, the Jim Starlight Centre, a premier sporting facility at Tsuut’ina Nation, will be utilized for some of the 16 sports.

“Working as partners, we are confident that Calgary will put forward a bid to host the Games that will reflect the vision to improve the quality of life for Indigenous peoples through sport and cultural activities.” — Tsuut’ina Nation Chief Roy Whitney
By Sam Laskaris
Local Journalism Initiative Reporter
Windspeaker.com

Calgary/Tsuut’ina Nation have announced their intention to present a bid to host the 2027 North American Indigenous Games (NAIG).

The 2023 NAIG will be co-hosted by Halifax, Dartmouth and Millbrook First Nation in Nova Scotia. Based on a hosting rotation, communities from British Columbia, Alberta, Saskatchewan, Yukon and Northwest Territories are eligible to submit bids to host the 2027 Games.

Late last month it was announced that the city of Kamloops had partnered with Tk̓’emlúps te Secwépemc, formerly the Kamloops Indian Band, and had been selected to serve as B.C.’s chosen bid to host the Games.

Though an official announcement has yet to be made, Windspeaker.com has learned that Saskatoon will be Saskatchewan’s representative in the bid process.

It is not expected that the territories will submit bids due to lack of venues to host the Games and the expected 6,000 participants, ages 13 to 19, in 16 sports.

“We put together a very compelling bid,” said Carson Ackroyd, the senior vice-president of sales for Tourism Calgary.

Ackroyd said Calgary reps had one stipulation when deciding whether to pursue a bid.

“As we went into this we said we’re not going to bid on this unless we have an Indigenous community to partner with,” he said.

Edmonton was the only other city from Alberta that had submitted a bid to ISCA, the provincial representative.

“We don’t get a chance to see what was in Edmonton’s bid,” Ackroyd said. “But I believe our partnership with the Tsuut’ina Nation was a difference maker.”

Edmonton had hosted the inaugural NAIG back in 1990.

Ackroyd is unsure whether the fact Edmonton previously hosted the Games played any sort of factor when choosing Alberta’s rep this year.

“When you look at the history of the event, it hasn’t been in the same location twice,” Ackroyd said. “Whether that went into a decision, I’m not really sure.”

Shannon Dunfield, who is not only the ISCA chair but also the president of the NAIG Council, would love to have Alberta host the 2027 Games.

“Alberta hosted the first NAIG in 1990 and ISCA has every confidence that Calgary, its surrounding Nations, communities and organizations will put forward a bid that will bring the games back to Alberta after 37 years so we can share our vibrant Indigenous cultures and the beauty of our province with all of Turtle Island,” she said.

Ackroyd said both Calgary and Tsuut’ina Nation have various venues that can host different sports for the NAIG.

The 7 Chiefs Sportsplex & Jim Starlight Centre is the premier sporting facility at Tsuut’ina Nation and is capable of hosting various sports competitions.

Ackroyd said officials from the joint Calgary/Tsuut’ina Nation bid have yet to finalize exact locations of where they would like all sports to be contested.

All the bids have to prepare for a few more steps before the NAIG Council Board of Directors announce which will be awarded the 2027 Games. That decision will be revealed on July 22 of 2023 during the final day of next year’s NAIG.

Prior to that, however, representatives must submit their final bid proposals by March 10 next year. Technical reviews of all the bids will follow later that month.

Then, in April of 2023, there will be site evaluation reviews of all the bids. Final presentations will be made to the NAIG Council board next May.

“We are pleased to hear that Calgary has been selected as the Alberta nominee for NAIG,” said Tsuut’ina Nation Chief Roy Whitney.

“Working as partners, we are confident that Calgary will put forward a bid to host the Games that will reflect the vision to improve the quality of life for Indigenous peoples through sport and cultural activities.”

Calgary Mayor Jyoti Gondek believes the city is an ideal location to host the NAIG.

“The Calgary area where the Bow and Elbow Rivers meet is a place of convergence where the sharing of ideas and opportunities naturally come together,” she said. “We can't think of a better place to host the North American Indigenous Games than right here.”