Buffalo is in a league of her own 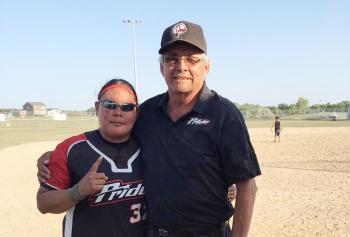 AbbyGirl Buffalo with Wayne Auger, coach of the Regina Pride, winners of the women's division at the Canadian Native Fastball Championships.

“She’s so good it’s not even hard to coach her.” —Ty Cutknife, the manager of the Native Dynasty
By Sam Laskaris
Windspeaker.com Contributor

Whether it’s softball or fastball AbbyGirl Buffalo has a knack for being on championship teams.

In fact, when it comes to winning, the 39-year-old infielder, who lives on Alberta’s Alexis Nakota Sioux Nation, is in a league of her own.

Buffalo is believed to be the only individual who has won titles at the Native World Series, a co-ed softball tournament, as well as the Canadian Native Fastball Championships in the same year.

Buffalo has managed this impressive feat not only once but twice now.

“I’m not sure how to explain it,” Buffalo said of her considerable successes in both tournaments. “They’re overwhelming when I win them.”

Buffalo, who works as the general manager/advisor of the gaming area at Eagle River Casino in Whitecourt, Alta., does not have a favourite title that she has won.

“I don’t have a particular one,” said Buffalo, who grew up in Maskwacis and is a member of the Samson Cree Nation. “They are all memorable.”

Buffalo first registered double championships in 2018. And she repeated this accomplishment this summer.

For starters, Buffalo was a member of the Native Dynasty club, primarily featuring players from the Calgary area, that captured the Native World Series. This event, which was held in Okotoks, Alta., wrapped up July 28.

Native Dynasty, was 7-1 at the Okotoks tournament, and beat the Xtreme Kaos 18-8 in the final.

Buffalo then switched sports and helped the Regina Pride win Canadian Native Fastball Championships, registering a perfect 7-0 record in the women’s division. This tourney, which wrapped up this past Sunday, was staged in Headingly, just outside of Winnipeg.

Buffalo is showing no signs of slowing down. She was named the best second baseman in the senior women’s division at the nationals in Headingly.

And she’s hoping to continue adding to her trophy case.

“I believe I can do it again next year,” she said of her victories at both tournaments.

Though she’s approaching the Big 4-0, Buffalo said age is not taking a toll on her abilities.

“I’m not slowing down,” she said. “And I’m not playing like I’m old or anything.”

Buffalo believes she can continue to play at an elite level well into her 50s.

And Ty Cutknife, the manager of the Native Dynasty squad, also believes that just might happen.

“They say your prime is in your mid 30s for softball,” he said. “But there’s no sign of her slowing down.”

Cutknife, who also plays for Native Dynasty, and Buffalo have known each other since she joined the squad 13 years ago.

“In all honesty, from the moment I met her, she’s always been someone I’ve looked up to,” said Cutknife, who is seven years younger than Buffalo.

Cutknife praises the professionalism that Buffalo brings to the diamond each outing.

Cutknife also speaks highly of the fact that Buffalo can easily switch between softball, which features underhand pitching, and fastball where hurlers employ a windmill delivery.

“Not too many players can make that transition,” he said. “She has that ability.”

Though he’s the Native Dynasty manager, Cutknife said there’s not really much coaching he has to do, especially when it comes to Buffalo.

“I take care of the lineups and the finances,” he said. “She’s so good it’s not even hard to coach her.”

“She’s a very modest person,” he said. “She doesn’t get too high or too low. She’s very even keel.”

Cutknife added he is somewhat surprised Buffalo did not end up playing ball at the provincial or national levels.

“To some extent yes, (I am surprised she didn’t play there),” he said. “But she values her family. There’s a lot of demands to play (at those levels). So because she values family so much that part doesn’t surprise me.”

Buffalo started playing softball at the age of nine on her First Nation. During her younger days she competed in the sport at four North American Indigenous Games (NAIG).

She won a silver medal at the 2006 NAIG held in Denver. And she was on bronze-medal winning teams at the 1995 and ’97 NAIG, staged in Blaine, Minnesota and Victoria, respectively.