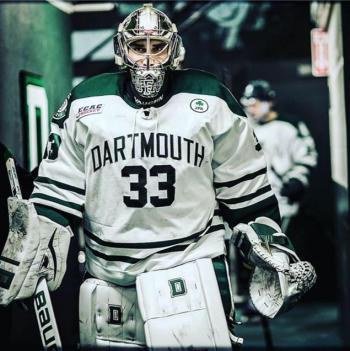 Devin Buffalo is excited his professional hockey career will commence soon. The 25-year-old goalie, a member of Alberta’s Samson Cree First Nation, is also pretty happy that he will be able to focus on just hockey this coming season.

Buffalo had spent the past four seasons in the NCAA Division 1 ranks, with the Dartmouth Big Green, an Ivy League team in New Hampshire.

It was confirmed this past week that Buffalo will begin his pro career with the ECHL’s Greenville Swamp Rabbits.

The ECHL, which shortened its name from East Coast Hockey League earlier this century, is considered the second best minor professional league in North America, behind the American Hockey League only.

Though he had spectacular junior and senior seasons while at Dartmouth, Buffalo said it was difficult at times being a student/athlete.

“In college you have a lot of things on your mind, even on game nights,” said Buffalo, who was born in the Alberta city of Wetaskiwin, but during the off-season lives on Pigeon Lake in the province. “At the college level it was challenging just because you might have a test before your game.”

Buffalo said mental visualization is a big part of his game. But at times he was forced to miss some of Dartmouth’s pre-game skates – where he would have worked on that part of his game – because he had a class to attend.

But now that he’s turned pro, Buffalo, who graduated this past June with a degree in Government, will not have to juggle his academics with his hockey career.

“I think it will improve a lot,” he said of his on-ice performance.

Buffalo thinks being able to balance his academics and athletics did prove to be beneficial.

Buffalo said having to worry about his classes did take a bit of a toll on him.

“It definitely affects your mental preparations for sure,” he said.

Not that you would be able to tell by the impressive numbers Buffalo registered this past season.

For his efforts Buffalo was nominated for the Hobey Baker Award, annually presented to the top male U.S. collegiate hockey player.

And he was also named to the all-Ivy League second all-star team.

Buffalo had an opportunity to turn pro this past March, after the Dartmouth season concluded. A couple of ECHL teams were interested in his services right away, but Buffalo opted to be patient as he was keen to finish his schooling first.

Despite turning down that pro interest in the spring, Buffalo was confident some franchises would be looking to offer him a spot for the 2018-19 campaign.

“I was hoping so,” he said. “I looked at my (senior) year of being deserving at a look by pro teams.”

A handful of ECHL clubs did reach out. Buffalo said one of the reasons the South Carolina-based Swamp Rabbits appealed to him was because Greenville does not currently have an affiliation with a National Hockey League franchise. Buffalo will not have to report to a training camp with a club that has NHL goalie prospects on its roster.

The Swamp Rabbits currently only have one other netminder under contract for the coming season. That would be 28-year-old Garrett Bartus, an Illinois native who is gearing up for his sixth year of pro hockey.

Bartus spent the past season with the ECHL’s Fort Wayne Komets.

Buffalo signed a one-year deal with the Greenville squad.

Swamp Rabbits’ head coach Kevin Kerr is excited about the fact Buffalo will be joining his roster this season.

“Devin had a great season at Dartmouth last year and has worked extremely hard to get where he is in his career,” Kerr said in a news release. “We are excited to have him in Greenville and eager to see how his work ethic and play will translate at the ECHL level.”

Before he headed to Dartmouth College, Buffalo had played three seasons of junior hockey.

Buffalo will head to Greenville late this month to prepare for the coming season. The Swamp Rabbits will begin their regular season schedule on Oct. 12 with a home contest against the Toledo Walleye.