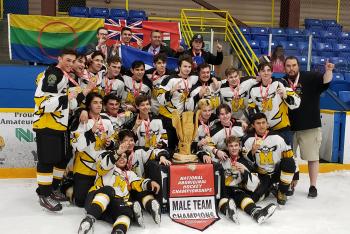 “We were given another opportunity and cashed in on it. I think it’s a once-in-a-lifetime chance you’ll see something like that in a national tournament.” —Manitoba’s head coach Kevin Monkman
By Sam Laskaris
Windspeaker.com Contributor
WHITEHORSE

It was a bizarre way to conclude a national tournament.

The National Aboriginal Hockey Championships (NAHC) wrapped up on Sunday in the Yukon capital of Whitehorse.

And it was an especially unusual ending for the Manitoba boys’ squad, which ended up playing in and winning both its bronze-medal and gold-medal games.

The Manitoba club originally thought it could place no higher than third in the annual tournament, which features Indigenous Bantam and Midget players, when it was downed 6-4 by Alberta in its semi-final outing on Saturday.

But after the Manitoba club had played one period in its bronze-medal match against British Columbia, news broke that the Alberta team had been disqualified from the event.

That’s because officials from the Alberta club could not find suitable alternative travel accommodations to get back home. Team officials had booked a flight back home before Sunday’s gold-medal game was scheduled to be played.

Since members of the club were not able to stick around for its gold-medal contest, the Alberta team was turfed. And it was announced that the winner of the bronze-medal tilt would advance to play in the championship final against Saskatchewan, which had defeated B.C. in its semi-final.

About four hours after registering a 5-3 victory in the bronze-medal game, Manitoba took to the ice again for the gold-medal battle. It convincingly defeated Saskatchewan 6-1 in that contest.

“We were given another opportunity and cashed in on it,” said Manitoba’s head coach Kevin Monkman. “I think it’s a once-in-a-lifetime chance you’ll see something like that in a national tournament.”

Monkman said the Manitoba coaching staff was not concerned about its side having to play two games within mere hours.

“These kids are elite athletes,” he said. “They train 365 days a year. I knew their conditioning was there.”

Monkman said his charges responded enthusiastically when they were informed between periods of their bronze-medal match that they could also go on to play for a gold medal.

Monkman said he did not attend an early Sunday morning meeting, which included tournament officials and Alberta team representatives, who were pleading for the time of the gold-medal final to be bumped up so they could catch their scheduled flight.

When the Alberta squad was disqualified for not staying to compete in its final, tournament organizers decided that no club would win more than one set of medals.

Despite losing to Manitoba in the battle for third place, the British Columbia side was awarded the bronze medals.

Saskatchewan ended up winning the gold medal in the girls’ division. Saskatchewan downed the two-time defending champs from Manitoba 4-1 in its final.

For Monkman, this marked the sixth consecutive year he has served as the head coach of the Manitoba boys’ entry at the NAHC.

“The goal every year is to play in the medal rounds,” Monkman said of his club’s pre-tournament expectations. “We were able to do that by playing on the last day.”

This year’s NAHC attracted 18 clubs, nine in the girls’ division and nine in the boys’ category.

The winning Manitoba boys’ entry was bolstered by a half-dozen players who toiled for Junior A clubs during the 2018-19 campaign.

This list included Nakodan Greyeyes, who served as the team’s captain. Greyeyes spent the past year with the Dauphin Kings of the Manitoba Junior Hockey League.

As for Lynn Regnier, the head coach of the gold-medal winning Saskatchewan girls’ team, he now has three tournament titles, having previously won in 2014 and 2015.

Regnier knew Manitoba would once again ice a formidable squad in its quest to win three consecutive championships.

Regnier scouted Manitoba quite a bit in this year’s tournament before his charges squared off against them in the final.

“I was actually positive,” he said. “I knew if we went out there and skated hard, good things would happen.”

Regnier also stressed to his players the importance of staying disciplined and out of the penalty box.

“I think we had a more disciplined team and our speed helped,” Regnier said. “We picked a lot of girls this year that could skate well and they worked hard.”