Biedermann continues to impress in second season with Cubs 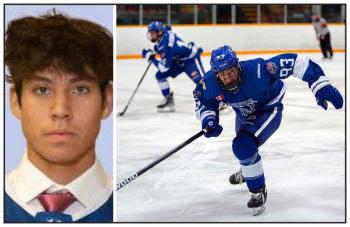 Billy Biedermann is willing to be patient.

And while being so, the 17-year-old member of Moose Cree First Nation in northern Ontario continues to rack up points on the ice.

Biedermann started making a name for himself last season when he joined the Greater Sudbury Cubs of the Northern Ontario Junior Hockey League.

Despite being a rookie and just 16, Biedermann was one of the Cubs’ top performers during the 2021-22 campaign, finishing in a tie for second in team scoring with 38 points, including 18 goals, in 48 regular season matches.

Biedermann has already exceeded his rookie point production this season. He’s collected 41 points, including 15 goals, during his first 30 contests.

At his current scoring pace, and the fact the Cubs have 24 regular season matches remaining, he should easily hit a point objective he had established at the start of the year.

“My goal was to be in the 60s, which I should get,” Biedermann said.

In fact, he should easily surpass that total if he continues his recent torrid play. Biedermann averaged more than two points per outing in his last five December matches, scoring twice and adding nine assists.

Greater Sudbury’s first match of the new year is scheduled for Thursday, Jan. 5 against the visiting Elliot Lake Red Wings.

In part because of his solid rookie season with the Cubs, there was some talk Biedermann might catch on with a club in the higher calibre Ontario Hockey League (OHL) this season.

He did attend the Barrie Colts’ training camp as a free agent but did not crack the squad’s roster, paving his return to the Greater Sudbury squad.

Biedermann’s chances of being drafted by an OHL franchise were hindered because he didn’t play any games during the 2020-21 season. His entire OHL draft season was wiped out because of the COVID-19 pandemic.

Instead of continuing to aspire to play in the OHL, Biedermann is now hoping to eventually garner an athletic scholarship offer from an American university.

He had an official visit to the school, located in Sault Ste. Marie, Mich., in mid-November. But reps from the American university have not made Biedermann any sort of scholarship offer.

“They want me to keep playing well and maybe something will happen,” he said.

Biedermann, a Grade 12 student at St. Charles College in Sudbury, is also faring well at school. His over-all average is about 80 per cent.

Though he would have three more seasons of junior eligibility remaining and could conceivably spend those years with the Cubs, this could be Biedermann’s final season with the northern Ontario team.

“I would like to go somewhere else,” he said.

That preferred somewhere else is the United States Hockey League (USHL), the top Junior A circuit south of the border.

Biedermann believes he would benefit by playing in the USHL. He said his Nepean-based agent David Cosentino is currently in discussions with various teams with the hopes he could land himself a spot in the 16-club league for the 2023-24 season.

Biedermann believes that if he continues to develop in the USHL in the coming years he would be better prepared to move on and play at the American collegiate level.

For now, however, Biedermann will focus on his current season with the Cubs, which he hopes will culminate with a championship title.

The Cubs are sporting a 27-5-2-0 record. Besides having a healthy 10-point lead over the second-place Blind River Beavers in the NOJHL’s West Division, the Greater Sudbury club also has the best over-all record in the 12-team loop.

“I’m excited about what’s to come,” Biedermann said about the remainder of his team’s regular season and playoff schedule this year.

Since its side is capable of having a lengthy post-season, Biedermann believes the club’s brass is looking to hopefully get even stronger prior to the league’s trade deadline on Jan. 10.

“I think they are trying to make some moves,” he said.