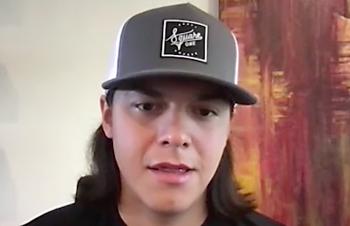 “Obviously I have a lot of support and a lot of people who are going to miss me here. But at the same time, I’m excited to be a Hurricane and to get to Carolina.” — Ethan Bear from his home in Edmonton
By Sam Laskaris
Local Journalism Initiative Reporter
Windspeaker.com

Ethan Bear is even more keen for his next hockey season to commence.

The 24-year-old defenceman, a Cree from Ochapowace Nation in Saskatchewan, will no longer be suiting up for the Edmonton Oilers.

That’s because the National Hockey League squad traded Bear this past week to the Carolina Hurricanes in exchange for forward Warren Foegele.

The Oilers had selected Bear in the fifth round, 124th over-all, in the 2015 NHL Entry Draft. He had spent his entire pro career with the Edmonton organization.

Before turning pro, Bear spent four seasons with the same junior franchise, the Seattle Thunderbirds of the Western Hockey League.

He had never been traded before last week’s deal.

“This is the first time I’ve experienced this,” Bear said of the trade. “Honestly, it’s been a pretty crazy couple of days.”

Bear was a popular member of the Oilers’ roster. And he’s considered a role model for Indigenous youth across North America for making it to the NHL.

Though his First Nation is in Saskatchewan, he was still considered a local product in Edmonton since he was playing in Alberta, another western Canadian province.

“Obviously I have a lot of support and a lot of people who are going to miss me here,” said Bear, who attended the virtual press conference from his Edmonton home. “But at the same time, I’m excited to be a Hurricane and to get to Carolina.”

Bear also expressed some relief that he will now be playing in Raleigh, the North Carolina city which is not deemed a hot hockey market.

“Honestly, I’m really looking forward to it,” he said. “It was nice to be not that far away from home (in Edmonton). But at the same time, you always have somebody coming in and somebody always needs something so in a sense it is a relief.”

Bear and his Edmonton teammates are no doubt disappointed with the way things ended during their 2021 campaign.

The NHL season, which traditionally begins in October, didn’t start until January because of the COVID-19 pandemic.

The Oilers, who were participating in a seven-team, all-Canadian division, posted an impressive 35-19-2 regular season mark.

Bear and his teammates were hoping for a lengthy playoff run but were upset 4-0 in their opening-round, best-of-seven series by the Winnipeg Jets.

Afterwards, Bear had racist comments directed his way on social media as some felt his miscues were to blame for the club’s season-ending Game 4 loss.

Plenty of support poured in for Bear after news of the racist comments were made public.

Bear did not register a point in the Oilers’ four playoff contests. And he admittedly did not have as good a regular season as the year before.

During the 2019-20 campaign Bear had what was deemed a breakout season, accumulating 21 points in 71 matches.

But in the abbreviated 2021 season, in which he missed some action with a concussion, he had eight points, including just two goals, in 41 games.

“Obviously I didn’t have as good a season as I would have liked,” he said. “I’m just going to use that as motivation going forward.”

In part because of his past—he averaged more than a point per game in his final junior season in Seattle racking up 70 points in 67 games—some believe Bear is capable of becoming an elite NHL defenceman.

“That’s hard to say,” he said when asked whether he believes he’s capable of eventually being on a top defensive pairing for an NHL club. “That’s something I can’t really control right now. All I can say is I’m willing to work hard. I’m going to make sure my diet is good and I’m training every day and just come to the camp in the best shape possible.”

Bear realizes he will have to make a new impression not only on the Hurricanes’ coaching staff but also with the club’s fans. Carolina is in the league’s Eastern Conference, unlike the Oilers who are in the Western Conference, so many team supporters might not be too familiar with him as there have not been many opportunities to see him play.

“I know I can contribute in pretty much all aspects of the game,” Bear said, describing his play.  “I think I’m a pretty well-rounded, two-way defenceman. I really enjoying defending. It’s a fun part for me. I’ve always taken big pride in it. But you know when you can get in on a rush and create something on the blueline, I think that’s where you have the most fun in the game.”