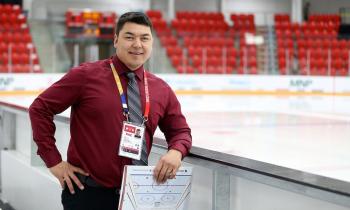 Neco Towtongie was part of the 2019 Aboriginal Apprentice Coach Program, serving as an apprentice coach for the Northwest Territories at the 2019 Canada Winter Games in Red Deer, Alta.

A maximum of two apprentice coaches from each province or territory will be selected for the multi-sport 2023 Games. Public interest forms are due Jan. 13, 2022.
By Sam Laskaris
Local Journalism Initiative Reporter
Windspeaker.com

There is already plenty of interest in a national Aboriginal Apprentice Coach Program mere days after details were announced.

The Aboriginal Sport Circle, the national governing body of Indigenous athletics in Canada, has taken over the mentorship program. It was previously operated by the Coaching Association of Canada.

The program allows Indigenous individuals from all provinces and territories to serve as apprentice coaches at both the Canada Summer Games and Canada Winter Games.

On Dec. 2, the ASC announced it was seeking expressions of interest from those wishing to serve as apprentice coaches at the 2023 Canada Winter Games, which will be staged in Prince Edward Island.

A maximum of two apprentice coaches from each province or territory will be selected for the multi-sport 2023 Games for a total of 26 individuals.

Ang Arsenault, the acting manager for Indigenous Coaches Education and Development, said ASC officials are thrilled with the initial interest in the program.

As of Thursday, seven days after details were revealed, a couple of dozen individuals had already expressed interest.

“We’re breaking records,” Arsenault said. “We currently have 24 applications which has exceeded our expectations.”

Since the deadline to express interest in the program is still more than a month away, Arsenault anticipates perhaps 100 people will send in their requests.

Following the initial expression of interest, those who are still interested in being part of the program must submit a full application by Feb. 10, 2022.

“That will provide a better picture of what they’re signing up for,” Arsenault said of the next application form.

Representatives from the various provincial and territorial sports organizations will be in on the decision-making processes of picking coaches for the program.

Obviously, there will not be enough spots for all of those who wish to take part, but there will be some consolation for many who do not get chosen.

That’s because a similar apprentice program will be held for Indigenous coaches who wish to be a part of the next North American Indigenous Games (NAIG).

Halifax will host the 2023 NAIG, another multi-sport competition.

“We’re working on the guidelines for that right now,” Arsenault said, adding she’s hoping details for the NAIG apprentice coaching program will be released early next year.

As for the Aboriginal Apprentice Coach Program, it is expected all of the participating coaches will be selected by March 17.

Each apprentice coach will be assigned a mentor coach, ideally one who will also be taking part in the 2023 Canada Winter Games.

The idea is to have mentor coaches in attendance when their respective apprentice coaches take part in various professional development sessions leading up to the Games.

The goal of the program is to provide apprentice coaches with an opportunity to learn and grow themselves by taking part in an elite multi-sport competition.

Though they will work alongside other Games’ coaches, the apprentice coaches are expected to have key roles with their teams. But they cannot at any time serve as the head coach of their program at the Games.

Arsenault said a resident Elder is also being sought to work with those in the program.

“Just like a resident Elder would in education, they’ll provide some counselling, support for mental health and then something on the cultural side,” she said.

Arsenault said the resident Elder to work with program participants will be named by March 17 as well.

In order to participate in the program, individuals must be Canadian citizens and have First Nations, Métis or Inuit ancestry.

“We have a lot of high-level coaches that have participated in the program,” she said.