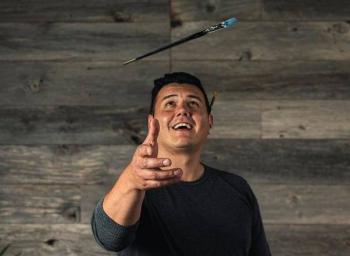 “Success really happened for me a couple years ago when I sort of got real with who I was as a person.” —a Anishinaabe artist Patrick Hunter
By Adam Laskaris
Local Journalism Initiative Reporter
Windspeaker.com

When Canada’s curling teams hit the ice at the Olympics in Beijing next February, Patrick Hunter will be able to point at the uniforms on his TV and say “Hey, I designed those.”

“I'm more stoked that I don't have to keep this big secret anymore,” Hunter said in an interview with Windspeaker.com, adding that the design had been under wraps since the summer.

The uniforms follow in the spirit of the Truth and Reconciliation Commission’s Call to Action No. 83, which calls for “Indigenous and non-Indigenous artists to undertake collaborative projects and produce works that contribute to the reconciliation process.”

“They represent exactly what our sport and country is about,” said Katherine Henderson, chief executive officer of Curling Canada, about the designs. “They send positive messages of inclusiveness, and our athletes should feel proud to wear them. The Canadian uniform is iconic in curling, and I can’t wait to see our teams wear them.”

Hunter said he did “the more organic art work that you see on the jersey,” while Hurrie helped put all the design elements together to create the completed product. The uniforms are produced by Dynasty Curling, an Indigenous-owned company based in Manitoba.

On the sides of the uniforms, Hunter put four eagle feathers to represent each member of a curling team. On the sleeves he included braided sweetgrass, woven with cedar, tobacco and sage leaves. On the back and shoulders, there’s a large maple leaf to complete the look.

“I’m not gonna lie. This is a pretty proud moment,” Hunter said. “I think it'll be even better when I get to see them at the Olympics… It’s a crazy feeling.”

Hunter said the majority of it was designed inside of his mom’s house in Red Lake while on a trip this summer, and he hopes the design will provide “as much positive energy as possible for Canadian players.”

Hunter, who has worked with brands, including RBC and BMO, Ernst & Young, CTV and Global Affairs Canada, gained recognition earlier this year with a mask design for Chicago Blackhawks goaltender Marc-André Fleury.

Hunter said this was the first time he’d ever designed a team uniform, though.

“It's pretty original, because I've never done that before,” Hunter said. “I kind of went in doing what I do, and hoped it worked. And luckily, it's resonated with people all over Canada so far.”

Hunter said through the design process he found a reason to watch curling more and wants to join a team himself.

“I want to be [more involved],” Hunter said. “I was never really that big into sports growing up. I'm gonna actively try to get into curling a little bit more now. I do jerseys for Olympic sports teams…  so I should probably get into it.”

Curling fans will get an answer this weekend of who exactly will be wearing Hunter’s work, with the men’s and women’s finals set for the Canadian Olympic curling trials this Sunday in Saskatoon.

Hunter said his personal growth as an artist helped by recognizing his connections to personal identity.

“Success really happened for me a couple years ago when I sort of got real with who I was as a person,” Hunter said. “I was trying to hide those kinds of things for a while, being Indigenous and being gay too. And then it wasn't until I really leaned into both of those things that I started getting work because I was niche and different.”

Hunter would pass on similar advice to other artists who may be struggling to embrace their identity,

“Your culture is cool. Who you are as a person is cool,” he said. “Try to infuse that into your work, and I guarantee success will come.”