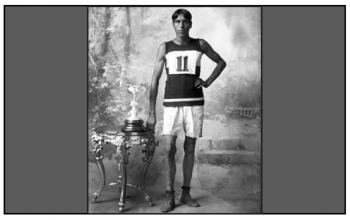 Most Canadians have probably never heard of Fred Simpson.

But Alderville First Nation Chief Dave Mowat is continuing his lifelong quest to have more people learn about the accomplishments of his great-grandfather.

Mowat has been reflecting on Simpson in recent days because the Summer Olympics are being staged in Tokyo.

Simpson, nicknamed the Ojibway Thunderbolt, is Mowat’s mother’s maternal grandfather. He placed sixth in the marathon event at the 1908 London Olympics. The race included Onondaga runner Tom Longboat of Six Nations in Ontario and Louis Tewanima, a Hopi Native American from Arizona.

Longboat collapsed during the London marathon and did not finish the race, while Tewanima finished three spots behind Simpson in ninth place.

Simpson continues to have the greatest finish ever by an Indigenous runner from Canada in the men’s Olympic marathon event. He is also tied for best finish by Canada ever with Jerome Drayton, a German who represented Canada at the 1976 Montreal Olympics, who also placed sixth in his marathon event.

Despite Simpson’s achievement, both Longboat, who earned his share of recognition for winning the 1907 Boston Marathon, and Tewanima seem to be better remembered than Simpson.

Longboat was designated as a person of National Historic Significance back in 1976. In 2008 the Ontario government declared June 4 as Tom Longboat Day. The day has been celebrated annually since, even though it was determined officials made a mistake believing Longboat had been born on June 4 when in fact his birthday was July 4.

An annual national awards program was created in 1951 – the Tom Longboat Awards – to honour Indigenous athletes and their achievements.

Tewanima, who went on to win a silver medal in the men’s 10,000-metre race at the 1912 Stockholm Olympics, has an annual race dedicated to him in Arizona.

Mowat said he is not irked that other Indigenous runners from the 1908 Olympics receive more recognition than Simpson does.

“I don’t think like that, but other people do,” he said.

But Mowat is hoping to one day elevate the recognition of his great-grandfather’s accomplishments.

“What I’d like to do is stage a marathon, possibly around Rice Lake,” Mowat said. Rice Lake is located on the south side of Alderville First Nation.

Ideally, Mowat would like to hold the event on July 24 to coincide with the 1908 day Simpson ran in London.

“I would like to do that in the next year or two,” Mowat said, adding both Indigenous and non-Indigenous runners would be invited to his community to take part.

Though he has written articles on Simpson over the years for various publications, Mowat also has a larger project in the works, a book that would include Simpson’s life story.

“The manuscript is still percolating,” he said. “I’m still aiming to get his story out in conjunction with the history of Alderville as well.”

Mowat, who is 60, has been chipping away at a manuscript for quite some time.

“I’ve been working on this for half my life,” he said.

Simpson, who was born in 1878, died in 1945. He was buried in a cemetery on Alderville First Nation.

Mowat recalls a wooden marker that used to be on Simpson’s grave. With some funds via a community trust, a four-foot memorial stone was unveiled at his grave in 2011.

“He’s a hero in our community,” Mowat said. “Over the last 40 years I’ve been hammering his story out.”

Simpson’s first race was a 10-mile event in Peterborough, Ont. in 1906. He placed third in his race debut and caught the eye of officials of a Peterborough club, which he joined and started training.

The following year Simpson placed second in a 19-mile event in Hamilton, Ont., officially making him a serious candidate for the Canadian Olympic squad for 1908.

Mowat makes a point of ensuring people realize Simpson was indeed from Alderville First Nation. Some have mistakenly thought he was from nearby Hiawatha First Nation on the north shore of Rice Lake where he moved in the late 19th century and married his wife.

The couple had four children by the time Simpson competed at the 1908 Olympics. Simpson turned pro in 1909 and competed in numerous races throughout Canada and the United States.

But after three years on the pro circuit he returned home to spend more time with his family.

“I think he was a family man and a working family man,” Mowat said of Simpson, who worked as a labourer at local farms. “I think that had a huge impact on his mobility” (and desire to keep travelling to various races).