Alberta Sports Connection board will have a Native perspective 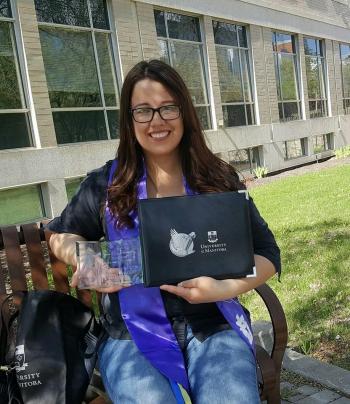 Kody Taylor has been appointed to the Alberta Sports Connection board of directors.

An Ojibwe woman has been named to the Board of Directors for Alberta’s agency responsible for promoting and developing sport in the province.

Kody Taylor, who moved to Edmonton from Manitoba last year, is one of 10 individuals selected to serve as directors for the Alberta Sports Connection.

The board members were introduced at a news conference in Calgary this past Thursday.
Taylor, a member of Manitoba’s Berens River First Nation, is one of eight new people on the board. She was appointed to a three-year term.

Andrew Ference, who played 17 seasons in the National Hockey League before retiring last year, was not only named to the board but will be its chair as well.

Others named to the board include a pair of Olympians; wrestler Erica Wiebe, who won a gold medal at last year’s Summer Olympics in Rio, and Helen Upperton, a bobsledder who captured a silver medal at the 2010 Winter Olympics in Vancouver.

Taylor, 29, is looking forward to serving on the board.

“It’s going to be exciting,” she said. “I didn’t know anybody else on the board before. We all have these completely different experiences. I think it’s a really good balance.”

Taylor has been working as the youth initiatives co-ordinator for the Alberta Native Friendship Centres Association in Edmonton since last August. Prior to that she had worked for five years with the Manitoba Badminton Association, moving her way up to the assistant executive director position.

While in Manitoba, Taylor also worked in various capacities for the Riverton and District Friendship Centre. She grew up in the small Manitoba community of Riverton, known for being the boyhood home of former NHL star Reggie Leach.

Taylor is related to the ex-pro, who is also Ojibwe, as her grandmother and Leach are first cousins.

Besides being involved with her community centre in Manitoba, Taylor was also active with the Friendship Centre Movement on a national scale. For five years she was a member of the National Association of Friendship Centre’s Aboriginal Youth Council. She served as the council’s president from 2010-12. This opportunity allowed her to travel to various events, including ones in New York and Finland.

Taylor has been presented with various accolades. She is a former recipient of the Manitoba Aboriginal Youth Achievement Award. She was also presented with a Queen Elizabeth II Diamond Jubilee Medal.

Taylor is also anxiously anticipating working with the Alberta Sports Connection. “Anything like this is a learning experience,” she said. “I’ll definitely get more board experience, which is always a good thing.”

A total of 38 candidates were interviewed for positions on the board. Taylor is the only Indigenous person that was selected.

Alberta Premier Rachel Notley attended the news conference last week introducing the board members. She felt it was important to include a wide variety of people from across the province on the board.

“We have heard loud and clear from Albertans that they want their agencies, boards and commissions to better reflect our growing and diverse province,” Notley said in a news release. “So that’s exactly what we are doing, because when boards are reflective of the communities they serve, they serve those communities better.”

Ricardo Miranda, Alberta’s Minister of Culture and Tourism, who also attended last week’s news conference, is looking forward to seeing what the Alberta Sports Connection board members will be able to collectively do.

“With the diversity and depth of experience of this new team, I’m excited to see everything they can accomplish as they work together to make Alberta’s sport system the best in Canada,” he said. Taylor believes her previous experiences will be an asset to the board.

“I think the big thing I can bring is my grassroots perspective,” she said.

Besides her work with the Manitoba Badminton Association, Taylor is a single parent with an eight-year-old son named Chayce. He’s participated in hockey, soccer, badminton, karate and swimming programs.

“I know the barriers to affording sports and recreation,” Taylor said. “There is a high cost. I can bring my perspective forward.”

Taylor is scheduled to attend her first Alberta Sports Connection board meeting on Feb. 24 in Calgary. A second meeting, which will also be staged in Calgary, is expected to take place in May.