Advances, struggles in anti-racism work in hockey to be focus of virtual event 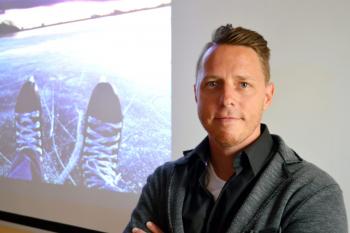 “If we want to create a more anti-racist society, that’s the responsibility of white people to do that.” — Dr. Sam McKegney
By Adam Laskaris
Local Journalism Initiative Reporter
Windspeaker.com

An upcoming “incubator'' event on anti-racism work in hockey looks to highlight progress and setbacks within the sport over the past 12 months.

The one-year look back at the Policy Paper on Anti-Racism in Canadian Hockey will take place March 20 at noon Eastern. It is designed to be an opportunity for coaches, players, parents and other people at all levels of the hockey community to share resources and connect with one another in hopes of advancing a more inclusive and diverse game.

“We’re looking to actually get a sense of what is happening on the ground,” said Dr. Sam McKegney, head of the English department at Queen’s University and one of four main authors of the policy paper.

“What are different organizations, teams and leagues doing? It’s a workshopping opportunity to see what has worked and what hasn’t worked.”

Interested presenters are asked to sign up by Tuesday, March 16, with attendees having until Thursday to request a ticket. Tickets are available for free, but any donations made will benefit Waniska Athletics run by Devin Buffalo, a member of Samson Cree Nation in Alberta who runs goalie clinics for Indigenous youth.

The policy paper was originally published in March 2020, the work of McKegney, Bob Dawson, a Black hockey historian and former Canadian collegiate player, Courtney Szto, an assistant professor in the School of Kinesiology and Health Studies at Queen’s University, and Mike Auksi, an Anishinaabe-Estonian PhD candidate at McGill University. Auksi had an extensive hockey playing career.

“This idea that this national winter sport is something that brings us all together is something of a lie. Hockey excludes just as much as it includes,” McKegney said.

One pervasive myth that exists is the nationalistic notion that hockey is ‘Canada’s game,’ even though it remains played by a small fraction of the country.

“It’s a way of saying ‘hockey belongs to us’, and by playing and loving hockey we show that we are the authentic inhabitants of this place,” McKegney said.

“And what that does is it erases Indigenous prior occupation. It encourages us to forget about the fact that white settler Canadians are an import on top of this pre-existing collectivity of societies.”

McKegney, who is a researcher with the Indigenous Hockey Research Network and a settler scholar of Indigenous literatures, stresses the importance of ensuring that anti-racism work — whether in the hockey world or elsewhere —  isn’t solely undertaken by the groups who have been historically targeted and underrepresented.

“Combatting racism is a problem for people who look like me. It’s not just on the shoulders of BIPOC individuals,” he said. (BIPOC is an acronym meaning Black, Indigenous and People of Colour.)

“If we want to create a more anti-racist society, that’s the responsibility of white people to do that.”

Much of the policy paper shines a light on Hockey Canada’s shortcomings in anti-racism work and focuses on Calls to Action 87 to 91 of the Truth and Reconciliation Commission of Canada. These action items focus on sports and reconciliation.

“We call out Hockey Canada in a pretty significant way,” McKegney said. “The reason for that is that Hockey Canada influences the way that the game is understood and encountered by more people in Canada than any other body.”

“We call upon Hockey Canada to celebrate the diverse history of hockey in Canada by disseminating knowledge about Indigenous and racialized players, teams, leagues, and experience,” reads a section in the policy paper on promotion of diversity within the sport.

A following passage reads, “We call upon Hockey Canada, and others invested in growing the game (i.e., National Hockey League, Canadian Hockey League etc.), to allocate a percentage of its annual budget to supporting Indigenous hockey in Canada (urban, reserve-based, and remote).”

McKegney says that along with Hockey Canada, other major bodies, such as USA Hockey and the NHL itself, often only take half measures to make it appear they are putting in a solid effort in anti-racism work while major structural barriers persist and racist incidents continue to occur on a regular basis under their watch.

“All of these major institutions are engaged in the optics of ensuring they look as they are engaging with anti-racism,” he said. “I know they’re big questions, but we want to hold these institutions to account.”

Media coverage of racism is another area in which the policy paper is looking to make change.