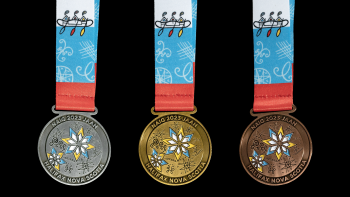 Ella Scothorn, a now Grade 9 student in Nova Scotia, designed the medals when she was in Grade 6. Professional Mi’kmaw artist Tayla Fern Paul helped take Scothorn's design to the next level.

“I’m grateful to the young artist who designed these medals and for her work.” — George (Tex) Marshall, the president of the 2023 NAIG host society
By Sam Laskaris
Local Journalism Initiative Reporter
Windspeaker.com

The estimated 5,000 athletes that will participate in the North American Indigenous Games (NAIG) this summer can now view the hardware they will be competing for.

Officials from the NAIG host society unveiled the medal designs for this year’s Games at an event in Millbrook First Nation in Nova Scotia on Jan. 17.

The Games, which run July 15 to July 23, will primarily be held in Halifax. Dartmouth and Millbrook First Nation will also host some of the competitions.

Organizers of the Games had put out a call back in 2019 for youth to help design the medals.

More than 100 design submissions were received.

The medal design competition was run in schools. Eight finalists were selected and they worked alongside professional artists to upgrade their work.

The winning entry was primarily designed by Ella Scothorn, who is from the Nova Scotia community of Hardwoodlands. Scothorn was in Grade 6 when she submitted her design proposal. Scothorn is now a Grade 9 student. NAIG has been postponed twice because of COVID-19.

“It was her idea,” Paul said of Scothorn’s original concept. “And then I kind of came in to fill in some of the details and bring it together as a professional artist. So really the inspiration was Ella’s work and Ella’s design and it’s so beautiful to see it here today.”

The medals also have a curved design. Curves are prominent in Mi’kmaw cultural drawings and etchings. Curves represent the things that grow and transpire when following one’s dreams.

Also, the ribbon attached to all of the medals features the 2023 NAIG logo as well as the word Kjipuktuk, which translates to Great Harbour.

“It makes me feel really excited and proud of this opportunity,” Scothorn said of the finished product design.

The soft-spoken Scothorn said the idea for her concept “kind of just came to me,” she said.

Paul was impressed with Scothorn’s idea.

“I think for me I was inspired by what came to you,” Paul said of Scothorn. “And then I saw the potential in that and what I could do with it.”

George (Tex) Marshall, the president of the 2023 NAIG host society, has been waiting for the upcoming Games for quite some time.

“I didn’t realize I had that much tenacity to go forward with something until this came forward,” he said.

This year’s Games were originally scheduled for 2020. But then the Games were postponed once again the following year. Organizers are now confident they can stage a safe version of the Games this summer.

Marshall, a well-known advocate of Indigenous sports in eastern Canada for a few decades, had first envisioned Halifax hosting the NAIG as early as the mid 1990s. He told Indigenous sports leaders of his desire at a meeting in Calgary.

“I boldly stated at that meeting we want to host NAIG in Halifax,” he said. “And some people chuckled and laughed a little bit. Nobody is laughing now. Here we are. We are going to host the largest multi-sport event in Atlantic Canada’s history.”

Marshall is thrilled Millbrook First Nation will host the archery competitions at the Games.
“That was a win-win for us,” he said, adding he’s pleased the traditional Indigenous sport will be contested at the Games.

Marshall is also pleased with the look of the medals that will be presented. A total of about 1,000 medals will be handed out at the Games.

“I’m grateful to the young artist who designed these medals and for her work,” he said. “It’s a testament of how strong we are as a people in that facet of our society, in art design, art work. There are some tremendous, tremendous artists.”

“The medals on display today make us so proud of our community, our youth and our athletes,” he said.  “Our community is proud to play a part in the hosting of NAIG and we know it will be a historic event that will shape the future of Indigenous youth and athletes in Mi’kma’ki forever.”