10 Calls to Action for anti-racism in hockey in Canada 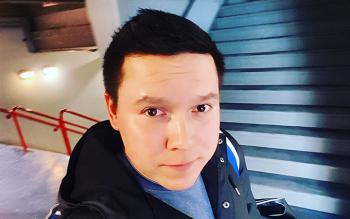 “I think we have the ear of the NHL and Hockey Canada.” — Mike Auksi
By Sam Laskaris
Windspeaker.com Contributor
MONTREAL

Mike Auksi had several highlights during his hockey playing days.

And now the 38-year-old, who is a member of Lac Seul First Nation in northern Ontario, is thrilled that he’s been able to make a valuable contribution to the sport off the ice as well.

A goal of the 29-page report, which was released last week, is to have the national governing body for the sport, Hockey Canada, take on leadership roles and implement anti-racism policies, protocols and practices at every level in the country.

The policy paper was co-authored by Courtney Szto, Sam McKegney and Bob Dawson.

Szto and McKegney both work at Queen’s University in Kingston, Ont. Szto is an assistant professor in Kinesiology and Health Sciences. And McKegney is an associate professor in the school’s English Language and Literature program.

Dawson, a sportswriter from Dartmouth, N.S., is also a Black hockey historian who broke a colour barrier while he played at St. Mary’s University in Halifax.

The idea to write the policy paper sprang from a roundtable on racism in hockey, which was held at Queen’s University in March 2019.

Auksi was part of that roundtable, an event which was staged to create awareness of the fact racism continues to be a significant issue in hockey.

A few months after participating in the roundtable event, Auksi was asked last fall whether he would be interested in helping to write the policy paper.

“I was honoured quite frankly,” he said of the fact he was approached to be one of the writers.

Those who wrote the policy paper are hoping three main goals are achieved.

For starters, they are advocating for policy changes. Secondly, they hope there is a push to re-educate coaches, parents, players and officials on the importance of anti-racism. And the other goal is to promote strategies to make hockey culturally safe, more inclusive and accountable for its practices.

To this end, the policy paper has 10 Calls to Action.

One of the calls involves training and certification. Hockey Canada officials are being asked to implement modules to address intercultural competency, conflict resolution and anti-racism in sport. These modules would be included for those seeking to be certified as coaches, officials, administrators and even billets.

Another call to action involves asking the Minister of Canadian Heritage to create an external oversight body whose responsibility would be to investigate claims of racial, sexual, homonegative, and gendered abuse/discrimination.

To this end, Auksi said the four policy paper writers will be meeting with the minister, Steven Guilbeault, on April 6 in Gatineau, Que., to discuss the recommendation.

Other calls to action include data collection, asking Hockey Canada to begin a system where it collects information on racialized groups in the sport, as well as the promotion of diversity, asking the governing body to celebrate hockey’s diverse history, including Indigenous and racialized players, teams, leagues and experiences.

Auksi is confident plenty of good will come as a result of the policy paper.

“I think we have the ear of the NHL and Hockey Canada,” he said.

Auksi grew up playing minor hockey in Toronto. He went on to play for a pair of his hometown post-secondary schools, the University of Toronto Varsity Rams and the Ryerson University Rams.

He also played two seasons of pro hockey in Estonia. He was able to represent Estonia, the northern European country where his mother Juta was born, in Olympic qualifying tournaments.

Auksi said he experienced some racism during his playing days. And he’s disappointed with the considerable number of racial incidents that continue to make headlines on a far-too-frequent basis.

“I struggle with the mob mentality that happens,” he said. “People get outraged on social media and then it goes away.”

Auksi believes Hockey Canada officials will want to pay close attention to the policy paper. He believes they should be concerned with dropping registration numbers across the country.

“If hockey enrolment numbers are dropping, we’re doing something wrong,” he said.

The full Policy Paper For Anti-Racism In Canadian Hockey can be viewed here: https://hockeyinsociety.files.wordpress.com/2020/02/policypaper_anti-racisminhockey_execsummary_final.pdf