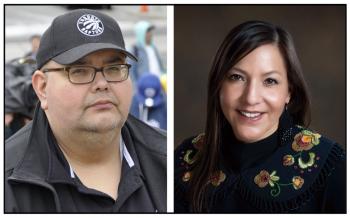 This Remembrance Day, the Association of Iroquois and Allied Indians wishes to pay its respects to all those who have served in the military, past and present, and to all those who paid the ultimate sacrifice so that we can enjoy the freedoms that we have today.

First Nation veterans were often at the forefront alongside their fellow soldiers. Sadly, many did not return home to their families. When war broke out they were not asked or ordered to join, and many did so of their own free will out of a sense of duty and responsibility to their people and land.

While we honour those who have fought in the wars for our future, we would also like to honour those who are in service today for their dedication. The feats and stories told to us by the men and women who have lived through wars have inspired all of us.

AIAI Grand Chief Joel Abram says “On November 11th , I reflect upon my own family who served in the military. One of my great grandfathers served in WWI, and another served in both WWI and WWII. They are a part of my heritage and I honour them and all those like them who served.”

AIAI Deputy Grand Chief Stacia Loft says “My Great Grandfather served in WWI and WWII, and my Grandfather served in WWII. Both of them were brave strong men that were willing to go and fight to protect their land and our freedom. Like many of our people, when the call came, they responded and did their part as a solider, and served in whatever role they were needed.”

Many of our people have given their lives so it is only fitting that we give them our gratitude.