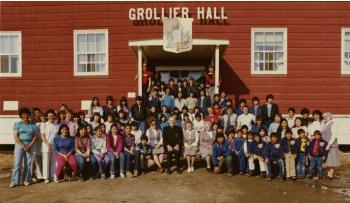 The Catholic Church must be accountable for abuse that took place at Grollier Hall Students' Residence.

The members of the Fort Norman Metis Community will not accept the last apology from Pope Francis and we look forward to a more fulsome one when he appears in Canada.

The crimes that were committed against our members while they were in the care of the Roman Catholic Church were devastating and have had lasting detrimental effects. The church itself must be 100% accountable for its acts.

Among colonial policies, residential schooling has stood out as especially damaging to Indigenous peoples.

More than 150,000 First Nations, Metis, and Inuit children attended the church-run schools or student residences between their establishment in the 1870s and the closure of the last residence in the mid-1990s.

Lindsay Norwegian, the President of the Fort Norman Metis Community, would like to tell the Pope that "The survivors and past members who have since passed can painfully name the members of your church who committed these acts of crime."

The crimes were harsh and damaging, and that pain many of our survivors carry today. More importantly, many victims have passed on and took their pain with them to their graves. We are expecting a response, to our modest request, to the Fort Norman Metis Community to hear from the Pope admitting what took place. The church knowingly hired criminals and turned a blind eye to what was taking place.

This is a church we are talking about; a church where many crimes were committed and it was never dealt with nor acknowledged nor admitted to truthfully. Instead, the church deflected the blame. A full acknowledgement MUST include admissions of the knowledge that the church had known about all of the abuses when they happened and the conspiracies to hide the truth. The church failed to care and provide for the survivors that were the actual victims.

The request is both humble and must be received with a sincere reply to the survivors and their families. All we want is for the church to promise that they will never commit such crimes ever again.

In closing, when we enter a church, it is the church's belief that we enter with a pure heart. Before we take communion, we must ask for forgiveness of our sins and repent. The same thing applies to our request to the Pope; before you come before our people; come to us with a pure heart and ask for forgiveness of your past sins that have been committed on our people.

There is no hope for redemption without confession. James 5:16 admonishes the sinner to "[c]onfess your faults one to another, and pray one for another, that ye may be healed."