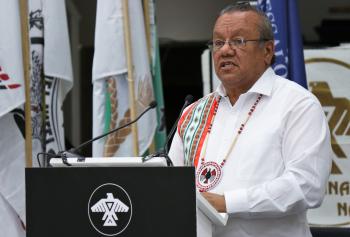 “The Anishinabek Nation is vehemently opposed to any effort to situate (small modular reactors) within our territory. The stance we have taken is in support of the seven generations to come.” — Grand Council Chief Glen Hare

The chiefs unanimously endorsed a Grand Council Resolution stating their clear opposition to the construction, operation, storage or disposal of small modular reactors (SMRs) in the territory of the Anishinabek Nation, including bodies of water.

“We, as Anishinabek, have the responsibility to act as stewards of our lands and waters,” said Anishinabek Nation Grand Council Chief Glen Hare.

“SMRs and nuclear power in general represents an unacceptable risk to our Nation. The Anishinabek Nation is vehemently opposed to any effort to situate SMRs within our territory. The stance we have taken is in support of the seven generations to come.”

Small Modular Reactors are not only smaller in scale than the types of nuclear power reactors that many Ontarians are familiar with, but are also transportable. Industry proponents of the SMRs are positioning this technology as a cheap energy and heating source for remote communities. The largest push to adopt these small nuclear fission reactors has come from those in the industry which is looking for cheap energy to power their mines and other industrial developments. The federal government has now put their support behind the SMRs.

“The Anishinabek Nation has advised the Senate Review Committee on Bill C-69 of our opposition to the effort of the nuclear industry in seeking exemptions from the Canadian Environmental Assessment Act,” said Grand Council Chief Hare. “The nuclear industry must be subject to public review and comment; compliance to Canada’s Environmental Assessment Act would ensure this.”

Bill C-69, An Act to enact the Impact Assessment Act and the Canadian Energy Regulator Act, to amend the Navigation Protection Act and to make consequential amendments to other Acts, changes how major infrastructure projects are assessed and approved, including oil and gas pipelines, electricity transmission and major highway and ports. The Bill recently underwent its Third Reading and was passed by the Senate with amendments on June 6.

Anishinabek leaders are concerned with potential environmental implications of SMRs. These reactors are small in scale but could contribute to the growing amount of nuclear waste that the federal government is looking to dispose of somewhere in Ontario.

“While other countries are shifting away from nuclear energy to more sustainable sources for their energy needs, Canada appears to be welcoming the expansion of the nuclear industry, with limited assurance on the safe containment of radioactive waste,” said Hare. “I am concerned that Canada may become the radioactive dump of the world as other countries seek to dispose of their radioactive waste.”