Veterans’ Stories: Sam Sinclair fought the good fight at home and on the battlefield 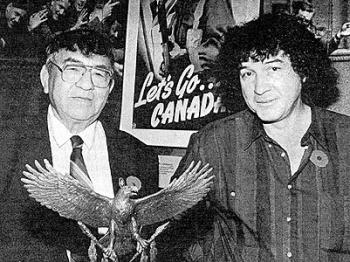 Sam Sinclair was 12 when the Second World War broke out in 1939. His teacher would talk to the class about the battles raging across the ocean, and Sinclair felt compelled one day to join in the battle. A few years later, when a group of young men from the community decided to sign up, and encouraged Sinclair to join them, he did despite the fact that he was only 15.

Whether on the battlefields of Europe during the Second World War, in the boxing ring, or in the political arena, Sam Sinclair was a fighter.

One of Sinclair's first hard-won battles took place in the schoolroom. He first went to school when he was just five years old, but because he spoke only Cree, the teacher sent him home after just half-a-day. He ran home in tears and his mother comforted him and told him one day he would show them he was capable of so much more.

He started school again the following year, and did just that. He caught on quickly and, determined to give it his all, he completed four grades within two years. That attitude of working to prove to himself and to others just what he could accomplish, what he was capable of, would continue to drive Sinclair in all that he did for the remainder of his life.

Sinclair was 12 when the Second World War broke out in 1939. His teacher would talk to the class about the battles raging across the ocean, and Sinclair felt compelled one day to join in the battle. A few years later, when a group of young men from the community decided to sign up and encouraged Sinclair to join them, he did, despite the fact that he was only 15. He lied about his age and went off to enlist without telling his parents.

When his commanding officers learned that he was underage, he was called in and questioned, but he stuck to his story about being 18. That, combined with a case of mistaken identity that resulted in his birth records being confused with those of someone else, was enough to keep him in the army.

He spent the first few years of his army career in Canada. Following D-Day, June 6, 1944, the beginning of the Allied invasion of Normandy, the Canadian Forces needed more men on the front lines. Sinclair was sent to train with the Calgary Highlanders. Three months later, he was shipped overseas as part of the 5th Brigade, 2nd Division and served in England, Belgium and Holland.

It wasn't long after arriving in Europe that Sinclair first experienced the horrors of war. His first mission was a night maneuver that required him and two other men to crawl through darkness across enemy territory, scout out enemy positions and crawl back to report the information they had gathered. Years later, Sinclair recalled his experiences that night of crawling through darkness, being fired upon by the enemy, of losing his rifle in the confusion, and of knowing his outfit wasn't far off, but being too afraid to move to try to get back to it.

Not all the fighting Sinclair did while in the army took place on the battlefield. Some of it took place in the boxing ring. While stationed in Europe, Sinclair, a natural athlete, got a chance to show what he could do. He won the 2nd Division's track and field championship and his abilities in the boxing ring earned him the middleweight championship. After returning home from the war he worked to establish the sport in Slave Lake in order to ensure other young people in his home community could get involved in boxing. Sinclair's skills in the ring earned him a place in Canada's Boxing Hall of Fame. He is one of only two Aboriginal fighters enshrined there, the other is his son, Gordon.

In 1946, he became a husband and, later, a father, grandfather and great-grandfather. He and his wife, Edna, would be together until his death.

After the war, Sinclair worked as a truck driver and a laborer before going to work for the provincial government. In 1960 he ran the first training camp in the Slave Lake area to certify Native firefighters. The course was so successful that three years later it served as the model for a provincial certification program for forest firefighters.

In 1971, Sinclair made the move into politics.

Many years of his life were dedicated to working for the betterment of Métis people. He served on the executive of the Métis Association of Alberta for 17 years, eight of those as president of the organization. Under his leadership, the association was transformed from a social club to a political organization. He also negotiated agreements with government that resulted in millions of dollars in funding for Métis housing and economic development projects.

He sat on the board of the Native Council of Canada, which works to promote wellness for Aboriginal individuals, families and communities, and helped create Apeetogosan (Métis) Development Inc., an organization that provides small business loans and business advisory services to Métis entrepreneurs.

But Sinclair didn't just concern himself with fighting for Métis rights at the provincial level. He was one of the driving forces behind the creation of the Metis National Council in 1983 and, during constitutional negotiations in the 1980s, his efforts helped to ensure Aboriginal and treaty rights would be protected under the Constitution and that the Métis were included as a constitutionally-recognized Aboriginal group.

Sinclair made a run at a career in mainstream politics in 1989 when he tried to earn the provincial Progressive Conservative nomination in Slave Lake. He ended up throwing his support behind fellow candidate Pearl Calahasen, who won the nomination and, later, the riding.

When he'd returned to Canada following the war, Sinclair had the same experiences as many Aboriginal veterans. They did not receive the same benefits granted to non-Aboriginal veterans. When he testified before the Royal Commission on Aboriginal Peoples, Sinclair told of how, when he had returned from serving in the war, he had tried to buy a plot of land. He was told he couldn't buy the land because it was in a flood plain, but later saw the land sold to other non-Aboriginal purchasers.

Later in life, he would fight to rectify that situation. As president of the National Aboriginal Veterans Association (NAVA), he fought to have the sacrifices made by Aboriginal veterans recognized and to see them receive compensation for the benefits they were denied all those years before.

Sinclair and fellow NAVA members won a partial victory in their battle on National Aboriginal Day, June 21, 2001, when a monument to Canada's Aboriginal war veterans was unveiled by then Governor General Adrienne Clarkson in Confederation Park in Ottawa.