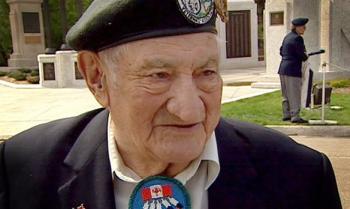 “We shared the burdens and sacrifices of the war only to be effectively barred from the benefits due veterans.” 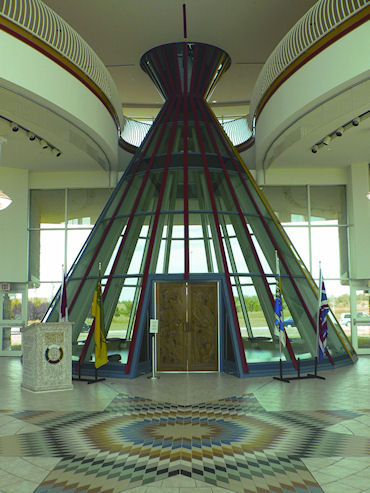 Howard Anderson’s unassuming personality was evident in the look on his face when he received a Regina Pats replica hockey team jersey on the day of his passing.

“There we were down on centre ice and the team captain skated up to him to give him a jersey the team wore in 1924, the same year he was born,” said Regina City Councillor Louis Browne. “He looked up from his wheelchair and his first reaction seemed to be “Why are they giving this to me?” and, really, there was nobody who deserved it more than Howard.

Back in 2006, Anderson had asked Browne if one day before a Pats game Canada’s anthem could be sung in Cree. His suggestion morphed into a grand entry of Elders, Aboriginal players and dignitaries, and the Cree version of O Canada kicked off the game as well.

“On Nov. 12 this year we had a First Nations and Métis celebration, and the team jersey was presented to Anderson as a surprise,” said Browne. “He was smiling all night and he looked vibrant. His handshake was firm. I was shocked to hear he passed away a little later.

“There’s some comfort to be found in the fact Howard died not long after attending an event meant to raise awareness and the profile of Aboriginals,” Browne added. “I think all of us can take some comfort in knowing that during Anderson’s final hours on earth he was surrounded by his community doing what he loved.”

“That was his thing … reaching out to people and letting them know about First Nations,” agreed Guy Lonechild, grand chief of the Federation of Saskatchewan Indian Nations (FSIN).

“He once told me it was extremely important for the future of Saskatchewan that the population know about the First Nations contribution to this province, especially when the subject came to Aboriginal war veterans.”

Anderson had always said he was a first class soldier in Europe. But back on Canadian soil he was treated as a second class citizen. It was a disgrace he would spend a lifetime to rectify.

“We shared the burdens and sacrifices of the war only to be effectively barred from the benefits due veterans,” he is quoted as saying in “Essays in World History: An Undergraduate Perspective” by Jeremy Mallenby.

Anderson served in the Second World War and upon his return acted as grand chief of the Saskatchewan First Nations’ Veterans Association. He had travelled and spoke English well, so he was in an excellent position to stand up to federal politicians and lobby for recognition of Aboriginal veterans.

Non-Native soldiers returning from duty received $6,000 to buy land and $2,600 in resettlement costs, spousal benefits, vocational training and other educational benefits. In stark comparison, Aboriginal soldiers received $2,320 and no other benefits.

Anderson’s work paid off and in 2002 the federal government offered $20,000 in compensation to each eligible First Nations veteran or their spouse.

Born in 1924 on the George Gordon First Nation located near the town of Punnichy in Saskatchewan, Anderson joined the Canadian Forces at 16. Because he was so young, he was assigned to the Service Corps, an important part of the war effort. Integral to the communications network, Anderson wrote dispatches and delivered them on a motorcycle.

After the war he returned to Gordon First Nation and farmed. Without having sufficient land to make farming profitable, he became the sports coordinator at the local residential school. Concerned about his community, he also served as a band councillor for many years.

Anderson had a lifelong interest in sports and a special place in his heart for children. He played on the Gordon’s hockey team, known as the “dream team”, and helped win the area championship.

After coaching at Gordon’s residential school, he moved to Sioux Lookout, Ont. and became the sports coordinator there. His coaching skills earned him the Tom Longboat award for achievement in sport.

In addition to securing compensation for veterans, Anderson was also involved in the fight to have First Nations veterans included in Remembrance Day commemorations in Ottawa. One of his other causes was to have the Veterans Memorial Glass Tipi erected on the Regina campus of the First Nations University of Canada. The distinguished-looking futuristic glass and steel structure serves as the focal point of the building’s public space and is used by Elders for ceremonies, feasts and teachings.

“I think the biggest achievement would be this memorial tipi,” Cote was quoted saying in The Star Phoenix. “I would consider that as one of the biggest initiatives that he started.”

Former FSIN vice-president Allan Adam said Anderson’s “mood and upbeat tone” helped win a reprieve in the 1990s from the European Union when it placed a ban on fur animals caught in leghold traps.

“We initiated a tour of European communities. Howard and a small group of Aboriginal vets helped us out. The ban was amended to include modified trapping methods.”

Doug Cuthand, also a former FSIN vice-president, recalled Anderson’s exuberance in a certain Remembrance Day ceremony in Ottawa in a special report to The Star Phoenix.

“The veterans were marching past the dignitaries, who included Governor General Adrienne Clarkson. Howard knew her from previous meetings and he and another First Nations veteran broke ranks and ran up to shake her hand. It was a breach of protocol and a security gaffe, but it also showed how human and down to earth he was. To him, each day was a gift to be lived to the fullest.”

The affable Anderson was “revered and respected, but never pushed his views in an overbearing or cruel way. He had so many battles to fight … in residential school, on the field of war overseas, and then in political meetings when he got back home,” said Councillor Browne.

“He was a true ambassador. He looked you in the eye when he spoke to you and he had strengths in bridging differences around the meeting table,” Lonechild recalled.

Anderson was 86 when he passed on the day after Remembrance Day.