The Huron-Wendat fell to their knees, but they never fell down 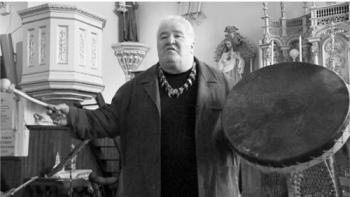 The safe-passage document was signed by James Murray to protect Huron rights when the land was changing over from French to English rule following the Battle of the Plains of Abraham in September 1759.

A frozen February day in 2009 took François Vincent Kiowarini, 64, onto his spirit journey. The Huron-Wendat nation was left to remember and honor its respected historian, artist and guardian of oral traditions and culture.

Huron-Wendat Grand Chief Konrad Siouï posted a community message that read “a great tree of the nation had fallen,” and that the council would keep an excellent memory of Kiowarini’s time among them.

Kiowarini, his self-chosen name meaning “he who sings his people,” grew to be a large man, noble of spirit and strong of heart who stood tall for his nation’s traditions, history and heritage.

Born Dec. 23, 1944 in his beloved village of Wendake, Vincent was an intelligent, curious youth with a flair for finding facts. In his teens, François began to research the story of his people, finding documents of great historical value for the Huron-Wendats, the province and the country.

One of his most monumental discoveries was the original copy of the 1760 Murray Safe-passage document, which he was asked to present in court as part of the Siouï trial. The safe-passage document was signed by James Murray to protect Huron rights when the land was changing over from French to English rule following the Battle of the Plains of Abraham in September 1759.

The Supreme Court of Canada declared the document a new treaty upon accepting François’ proof.

The young Vincent also had a natural talent for the arts. He received a bursary from Jean Chrétien, then minister of Indian affairs and later prime minister, in 1970 which encouraged him to pursue his two life-long passions: singing and researching his nation’s history.

Vincent deeply appreciated this privilege. Afterwards, he continued to learn through his own motivation and loving desire to know more about his family’s and his nation’s rich culture. What he discovered filled him with a strong sense of identity; he was Kiowarini, an artist-historian with a profound purpose.

When he sang, he sang his ancestors. To hear his warm baritone voice was to hear the power of the heart in expressing love, respect, gratitude and honor for all who had walked before him and for all who now walk as proud members of the Huron-Wendat nation.

To this deeply personal path he was loyal to the end. He never missed an occasion to generously sing the nation’s anthem, La Huronne, or to give a talk to tourists visiting the Notre-Dame-de-Lorette Church beside which he now lies, forever in his village.

A man of humble and firm faith, François had a particular devotion to the Dame-de-Lorette, Mary, guardian of the nation.

It was always with the greatest respect and admiration that he sang in the lovely church. He composed some of his own songs and was particularly proud of his Tribute to Marie de l’Incarnation; he was invited to perform for the Ursuline Congregation in 1969 and was re-invited for every anniversary celebration.

It was in 2007 that Kiowarini realized an important dream: to record his lifetime of singing. He went on to produce three collections of his finest work: Kiowarini sings the soul of his people, Kiowarini sings Christmas and Wendate asta, a re-recording of traditional songs such as the Peace pipe song, the Funeral song, and the Fire song.

François appeared in the 2008 National Film Board movie by Jean-Daniel Lafond Folle de Dieu (Madwoman of God). François recounts the Huron angle to her story and sings in her honor.

Lafond, on behalf of his wife, Governor General of Canada Michaëlle Jean, and himself, wrote a telling tribute to François Vincent for his funeral service in February. Lafond described François as a man of culture, of song, whose generous and profound voice made traditional Huron words resonate with his deep respect for the founder of the Ursuline order, friend of the Huron-Wendats.

Jean-Daniel Lafond spoke for many when he said: “I want to thank you, oh mountain of words, oh living library, who fought for his people’s identity, to preserve his culture and to revive the majestic Huron language through his songs.”

“He knew how to narrate so as to stir the collective conscience of the Wendat community,” said Lafond. “His voice rolled like a rock, expanding with the sound of the drum, becoming a drum in itself,” a drum that carried the story of four centuries of history.

François concludes his scene in the film with a saying he coined in the 1970s to express the valiant nature of his nation when faced with near extinction in the 17th century: “The Huron-Wendat fell to their knees, but they never fell down.”

Profoundly touched by this sentence, Lafond said “For me, this expresses François Vincent; it sums up the meaning behind his actions and the support he gave his community.”