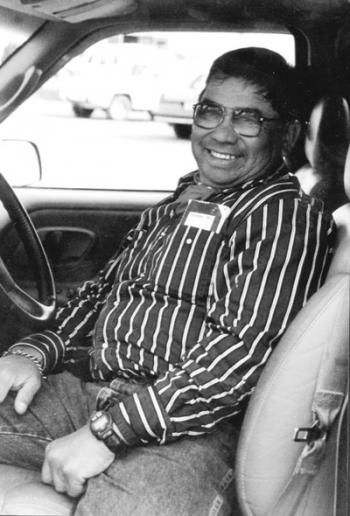 He was never judgmental, and had a way with people that made them feel at ease when speaking to him. He was also quick to remind the people of the community that he might be their leader, but direction for his actions and decisions must come from them.

In 1969, Grand Chief Archie Jack was one of the founders of the Union of British Columbia Indian Chiefs (UBCIC), the first provincial Aboriginal organization created in B.C. to represent First Nation people living on reserve. He served as leader of the organization.

The Union was set up, in part, in response to the federal government's White Paper on Indian Policy, which threatened to eliminate the Indian Act and, along with it, any special status for Aboriginal people.

Jack, born in Penticton on Aug. 14, 1934, served as councillor of the Penticton Indian Band and was elected as chief on three separate occasions, serving in the role for a total of 10 years. He also served as chairman of the Okanagan Tribal Council.

During his time as chief, the Penticton Indian Band organized a number of protests, including a blockade that was successful in its efforts to stop a planned expansion of the Apex ski resort.

Band members also occupied the Penticton airport during a dispute over ownership of the airport land, and set up a blockade for 87 days to show support for the Mohawk people during the Oka crisis.

Tensions ran high during each of these protests, and Jack's strong leadership was credited with keeping each situation from turning violent.

In 1996, Jack left band politics behind him and turned his attention to the area of education. In 1997, he became the first member of the Penticton Indian Band to be elected as a school trustee for School District No. 67 (Okanagan Skaha) and served two terms. During his time on the school board, he was instrumental in getting much needed renovations and expansions approved and completed for two schools in the rural area he represented, one in West Bench, the other in Kaleden.

Even after he was no longer a trustee, Jack continued his involvement with the school district as a member of the district's Aboriginal education advisory committee. On top of his achievements in the political and education arenas, Jack also made his mark in the world of rodeo. Earlier in life, he had been a championship saddle bronc rider. Later, he and Joyce, his wife of 32 years, raised horses on their ranch and he worked as a rodeo stock contractor.

Over the years, he also served as a mentor to many younger cowboys. Jack was a devoted father to his children, Joleen, A.J. and Shane. Supportive and encouraging, he was always there to watch as they took part in school activities. His supportive attitude spilled over for the benefit of other children as well.

He liked to see all children involved in positive activities, and at one point helped to create a rodeo club at Penticton secondary school to give Aboriginal students something they might be interested in getting involved in.

In 2004, Jack enrolled at the En'owkin Centre in Penticton where he earned his B.C. teacher's certificate. It is estimated that there are only about 250 fluent speakers of the Okanagan language left. Jack was one of them, and he dedicated much time and energy to passing his knowledge on to the next generation.

He also worked at the En'owkin Centre, helping to get a Web site up and running that would give people across the globe access to information about Okanagan language and culture.

His continuing efforts to revitalize Okanagan language and culture were recognized during an Indigenous traditional knowledge conference and he was awarded an honoary doctorate of Nsyilxcen language by the Okanagan Indian Education Resources Society at the En'owkin Centre.

He was a member of the Penticton Indian Band's Elder council, and helped develop a relationship between the school district and the council, helping the other members of the council feel comfortable enough to agree to have the Okanagan language and culture taught within district schools.

At the time of his death in a single vehicle accident at the age of 70, plans had been in the works for Jack to play a role in bringing that programming into the schools. Those that knew Jack remember him as a good leader who brought common sense and an even hand to bear in all that he did. He brought with him a wealth of experience gained through his many years in Indian politics, and a level-headedness that helped him diffuse potentially volatile situations.

They remembered him as a man who never reacted emotionally, but would give everyone a chance to speak, think about what had been said and then respond.

He was never judgmental, and had a way with people that made them feel at ease when speaking to him. He was also quick to remind the people of the community that he might be their leader, but direction for his actions and decisions must come from them.

Jack had a great sense of humor, which he used to good effect in both good and bad situations. People who knew him say they will remember his laugh and his animated personality. He was also known for his ability to see people just as people, not as being Native or non-Native.

Jack was more than just a teacher to his many young students. They saw him as a grandfather figure, and were devastated by the news of his passing. The crowd that gathered to say their goodbyes at his memorial service spoke volumes about the impact he had made during his 70 years.

School trustees who had come to know Jack through his work in education stood next to cowboys who knew him from his involvement in the world of rodeo. All of them were there to honor a man who had touched their lives in some way.