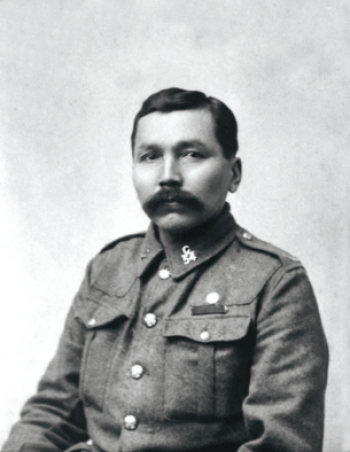 with files from Veterans Affairs

A large crowd of onlookers watched as French and Canadian veterans, soldiers and dignitaries gathered in the Canadian war cemetery at Vimy Ridge to pay tribute to the almost 20,000 dead who rest there.

Thirty-five hundred Canadian soldiers fell during the April 9, 1917 assault on the ridge, including at least 35 Aboriginal soldiers.

Veterans Affairs Minister Albina Guarnieri told the gathering about the exploits of one Native rancher from the Head of the Lake Band in the Okanagan who had been decorated for his actions on Vimy Ridge.

"Private George McLean was one of the soldiers who scaled the walls of history that day," the minister said. "At Vimy, he would distinguish himself and earn a Distinguished Conduct Medal for launching a solo attack against a group of enemy soldiers during the assault on Vimy Ridge.

McLean was born in Kamloops, B.C., on April 15, 1875. He was of noble lineage, grandson of Chillihetza, chief of the Douglas Lake Indian Band. His paternal grandmother was the daughter of Louis Clexlixqen, hereditary chief of the Kamloops Indian Band.

During the First World War, at age 41, McLean enlisted and sailed to Great Britain in 1916. By that December he was in France serving with the 54th Battalion of the Canadian Infantry (Kootenay battalion)

During the third day of the battle at Vimy, one of the officers of Private McLean’s section was wounded. McLean “carried him out of the melee and when he returned, he and a companion found themselves near a German dugout containing about 60 men,” reads McLean’s biography on the Canadian Government’s Veterans Affairs website.

“Armed with about a dozen Mills bombs—small grenades nicknamed "pineapples", he was about to throw the first one when his companion was killed by his side. He then (started) bombing in earnest. In the face of such determination, the German sergeant-major threw up his hands shouting “Do not throw the bomb”. McLean paused and the German asked how many soldiers were in his party. McLean answered that there were 150. The German then handed over his automatic and called to his companions who emerged with their hands up. McLean then marched the survivors to the British lines under cover of the German automatic.”

McLean became one of nearly 2,000 members of the Canadian Expeditionary Force (CEF) to earn the Distinguished Conduct Medal (DCM), the second-highest award for gallantry available to non-commissioned officers and privates in the Great War. The private's citation recounts his actions:

“Single-handed he captured 19 prisoners, and later, when attacked by five more prisoners who attempted to reach a machine-gun, he was able—although wounded—to dispose of them unaided, thus saving a large number of casualties.

McLean had been shot in the arm by a sniper and was returned to Canada he would eventually become a fireman in the Vancouver region. He died on Sept. 6, 1934 in Merritt, Thompson-Nicola Regional District.