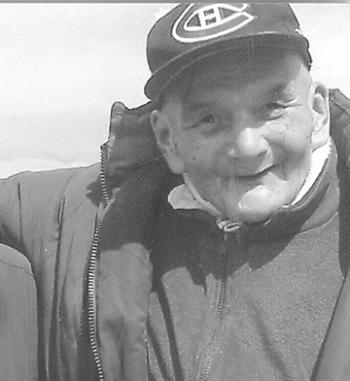 Venne was born at Hall Lake, Sask., just west of La Ronge, on April 14, 1918. His father, Roderick, died when Venne was still a young child, and his mother, Annie, did all she could to care for her children on her own. Then the opportunity arose for Annie to send her children to All Saints residential school, where their ability to be fed would no longer be dependent on whether or not she had been successful in trapping rabbits.

It was during his time at residential school that Venne was exposed to experiences that would help shape who he was to become—a man with a deep religious faith, and a love of the land.

Venne had lived on the land with his mother before going to residential school, but learned more about trapping while in school, when the principal brought local trappers in to share their skills and knowledge with the male students.

Once he left school, Venne put these lessons to good use, and spent many years working his own trapline and finding employment as a guide.

Venne was a member of the All Saints Anglican Church for much of his life. He was confirmed in the church in 1937 and it was there where he married Mary McKenzie in 1944. He served as a lay reader in the church for many years and was ordained as a deacon in 1988 and as a priest in 1989.

He later served as assistant priest at All Saints, and was named Archdeacon Paul Cannon of St. Albans’ Cathedral in Prince Albert in 1994.

He was also involved in the Diocesan Indian Council, the Diocesan Synod and the Anglican Council of Indigenous Peoples in Toronto.

While his faith and his connection to the land were important to Venne, so was trying to improve the lives of his people.

Venne was first elected as Lac La Ronge chief in 1971, and remained in the post until 1983. He was later re-elected in 1985 and served until 1987. But even after leaving public office, Venne continued to work on behalf of the community. In 1989, he was appointed to the Senate of the Federation of Saskatchewan Indian Nations, and was named a member of the Lac La Ronge band council of Elders.

During his time as chief, Venne spearheaded a number of initiatives that continue to benefit band members to this day.

Recognizing that economic development was one of the keys to self-sufficiency, Venne worked to create business opportunities for the band. Venne saw the growth in business ventures occurring in northern Saskatchewan, and knew that the band would have to become involved directly in those businesses if its members were going to benefit from that growth.

He also saw that the band’s chances for success would be greater if it didn’t try to go it alone, and worked to build relationships with other communities and businesses, and with provincial and federal governments, so all could work together toward a common cause.

Under Venne’s leadership, the band created the Kitsaki Development Corporation, the business arm of the band’s operations. Now known as the Kitsaki Management Limited Partnership, the organization became one of the most successful First Nation business entities in the country and became involved in as many as a dozen businesses, many of which were operated in partnership with non-Aboriginal businesses and/or other Aboriginal communities.

The first business venture the newly-formed corporation became involved with was Northern Resource Trucking, founded in 1986 as a joint venture between the band and Trimac Transportation.

Just over two decades later, and the list of partners in the business expanded to include 11 additional Aboriginal groups, allowing other communities to benefit from Venne’s efforts all those years earlier.

While Venne recognized the importance economic development would play for his community, he also realized that another key to future success lay in the area of education.

When, in 1974, the band voted to transfer control of its education programs from the provincial government to the federal government, it was Venne who worked to assure people that the move would be a positive one that would pave the way for the band to have more say in the running of the schools in which their children were being educated.

It was at his urging that the Saskatchewan Indian Federated College (now the First Nations University of Canada) created a program to train Aboriginal teachers to teach in on-reserve schools.

Venne also fought long and hard to have a school built in each of the six communities that make up Lac La Ronge and helped pave the way for the band to take over control of its education system. His efforts were recognized by when they chose to name a school on Far Reserve in his honor.

While much of the work Venne undertook on behalf of his people was done at the local level, he wasn’t opposed to extending his efforts to the national stage, or even the international, stage, when it became necessary.

In the early 1980s, when it became clear that then-prime minister Pierre Trudeau’s plan for a “made in Canada” Constitution didn’t include any protection of Aboriginal or treaty rights, Venne was one of the First Nation leaders who set out to try to change that situation. He and hundreds of other leaders made their way to London, England to lobby the British government in an attempt to put a stop to the process of repatriating the constitution.

While the efforts of Venne and the other leaders weren’t successful in ending the repatriation, they helped ensure that recognition of Aboriginal and treaty rights were included in the Canadian Constitution when it was proclaimed in 1982.

Venne was able to make things happen for his people in great part because of the man he was. He was dedicated to his family, his faith, and to working unceasingly for the benefit of the members.

He will be remembered for his determination, his compassion, his humor, and for the love he had for his people.

Venne was laid to rest at the All Saints Anglican cemetery on Dec.1, 2017.

Hundreds came to a public service held on Far Reserve to pay their last respects and to honor a man who had dedicated so much of his life to ensuring a better life for the people of the band, both now, and into the future.