Frank Williams: Major-league pitcher reached the heights and the depths 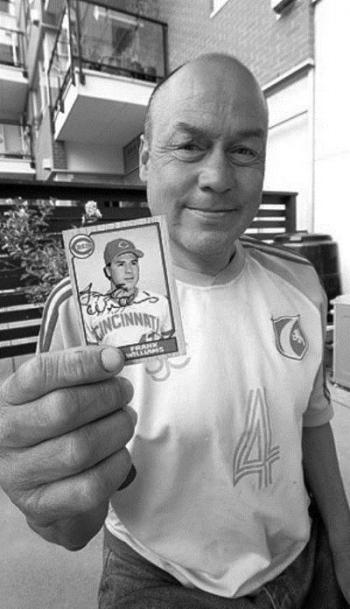 Former major-league baseball pitcher Frank Williams's life, which ended when he was just 50 years old, could be the subject of a "rags to riches and back again" Hollywood drama, but he will remain a shining star to many Vancouver Island Nuu-chah-nulth youth, including niece Jacqueline Watts.

Watts remembers how people in her community admired Williams and his sports world success, and how often they spoke of him. She was literally "spellbound" upon finally meeting him. She was a young girl and he was in his 20s and at the top of his game.

"He was such an inspiration to everyone. Even though he was adopted out, here was this guy who went out and succeeded. He was huge in my eyes before I even met him," Watts said.

Born the son of Frank Hodges and Mary Williams, who had moved from the Tseshaht Reserve in Port Alberni to Seattle in the 1950s, Frank and his twin brother Francis were abandoned at the hospital by their mother who had seven children at home and was ailing with tuberculosis.

The twins spent their formative years in a series of foster homes where they sometimes struggled to survive. With one family, the boys were once reduced to stealing dry dog food from a cupboard to fill their empty stomachs.

Their savior came in the form of a handicapped Boeing aircraft engineer, Dick McCullough, who had a withered right arm and believed in the power of sport to shape up-standing human beings. In his middle-class home they awoke one Easter morning to find a baseball and a glove in a basket.

The boys lived out their dreams playing baseball in Seattle suburb diamonds. Frank was the star pitcher while Francis caught his throws. The two were inseparable as the only blood family they knew, but Frank was to go his separate way when he was picked to join a combined team representing his city in a Babe Ruth League tournament. The team won city, state and regional titles before winning a national championship at Sicks' Stadium in August 1975 and Frank's star began to rise.

The twins made a pact that whoever made it big would be responsible for looking after the other.

When Frank was lured to Lewis-Clark State College in Idaho, he found himself needing tuition money.

"That's when someone contacted my uncle George Watts, and Frank came back to our band," explained Jacqueline. "He and other people helped him finally find his roots." Frank discovered he had a Canadian heritage with ties extending to Vancouver Island First Nations families.

As a college athlete he established himself as a pitcher who stymied opponents with a 90-mile-an-hour throw. He had the size and weight to impress scouts and was picked to play for several minor league teams, becoming known for a pitch thrown as a curve ball slider, leaving many batters slicing air.

The San Francisco Giants were the first to position him in the major league. Former Giants manager Roger Craig commented that Williams was a quiet and dependable player who could be counted on to go out every day and pitch.

Williams played extended seasons with the Cincinnati Reds and by the mid-80s he was making $500,000 a year. For six stellar years he lived the lifestyle of the rich and famous.

"It was high-class living, high-class everything," he is quoted as saying in a Victoria newspaper article published a year before his death. "You were treated the best in life. It's the best you could ever look for."
But his team ran off the rails when manager Pete Rose was disgraced for his gambling sideline. Williams was let go after the 1988 season and played with the Detroit Tigers in 1989. Later that year, when his wife smashed their car into a tree, Williams could no longer play the game due to a broken bone in his neck. He needed extensive plastic surgery to restore his face.

He was picked up by the New York Yankees and granted a year to recover, but he never did. It was over.

Depressed, Williams walked away from his wife and two children, retreating to his roots on Vancouver Island and living on the streets. His brother, who was also hampered by an injury following a bicycling accident, joined him and the two commiserated over their long-gone glory days.

After an attempted amateur team comeback in Victoria fizzled, Williams took construction jobs. He was not heard from until 2000 when firefighter Mark Perkins, who had pitched for the same Idaho college Williams played for later, helped rescue him from a drug overdose.

Perkins called Walt Burrows, the Canadian supervisor for Major League Baseball's Scouting Bureau, who arranged for Williams to receive financial support from a charity that assists ballplayers who have no income.

Williams' funk deepened when Francis was killed in an apartment fire. He blamed himself for not keeping their former pact. He later became a fixture in downtown flophouses.

He earned pocket money by signing baseball cards at a downtown sports memorabilia store.
Close friend Bob Soderlund, who helped repatriate Williams to his family, commented on how open-hearted and cheerful the player remained throughout his life.

"He was truly a good, generous person. He never tried to take advantage of anyone and enjoyed people's company. During his career he was an accessible player, always one to talk with fans and sign autographs after a game.

"It was so good to get him back here (to the Nuu-chah-nulth territory) to do a motivational-speech tour with the schools when he was playing. The youth got to know a great athlete and he got to know a lot of his family at the time, too."